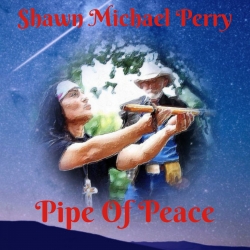 Shawn Michael Perry & Only The Brave

Highlighting the human experience as seen through indigenous eyes. The strength of his music and beauty of his words was enhanced.

Shawn has opened for and shared the stage with Redbone, Badlands, Bill Miller, Brian Adams, just to name a few.

Shawn's video "Forever" continues to get critical acclaim. Together with his band, "Only The Brave," Shawn is on the road spreading his message.

Shawn Michael Perry & Only The Brave Special Edition was nominated for multiple awards for the L.A. Music Awards.

Shawn Michael Perry has taken multi-hyphenate to new heights. This singer, songwriter, actor, educator and activist was born in Southern California into indigenous heritage; his mother, (Panamanian of Mayan ancestry), Shawn has embraced his culture, past and present with an eye to the future.

The strength of his music and beauty of his words was enhanced by producer John Avila who produced Shawn's first album, the talented bassist/producer of Oingo Boingo.