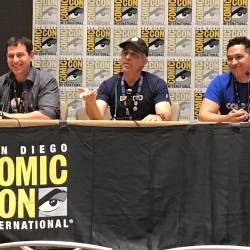 Los Angeles, CA, August 20, 2019 --(PR.com)-- It has been an eventful year for the Dark Specter team. After racking up multiple awards including eight Best Short Film wins, six wins for Best Actor, one win for Best Director, and more than a dozen other awards, Dark Specter 2 was given the honor of being screened on one of the world’s most coveted gatherings—Comic Con.

Dark Specter 2 is the story of an unlikely supervillain, the Dark Specter. With his mind and heart set on global domination, he finds himself caught between two worlds caring for his ailing mother while still trying to pursue his dreams.

The viewing was well attended and included a number of journalists, actors, entertainers, and film lovers. The attendees seemed to resonate with the unique storyline as they asked multiple questions during the panel about the characters, where they’ve been, where they’re going, and what a full series of the show would look like.

In an interview with IdeateTV just outside the screening room, actor and creator of Dark Specter 2, Bruce Nachsin, said, “I love superheroes, but I wanted to know what it’s like from the other side. Most comic villains are just a 2D cutout without any depth. But how does a villain really feel about things? I wondered what it would be like to have a ton of power, to be really strong, and potentially be able to take over the world, but be held back—like most people in their lives—by family obligations or work. What if you were this powerful being who couldn’t fulfill his potential because he has to take care of his family? He can’t put his family at risk, so he has to hold back what he really wants to do.”

Bruce goes on to say that the hope for Dark Specter 2 is that it becomes the cornerstone for a series pitch. The Dark Specter 2 team has a bible written, a pilot episode, and in fact an entire season completely mapped out. They just need to find the right partner and they’re ready to go.

In May earlier this year, Dark Specter 2 was released publicly on Facebook. Since then it has steadily amassed over 52K views and positive feedback from fans and media alike. Indie Shorts Magazine called it “a brilliant take on the superhero genre, subverting the paradigm, well supported by a stellar cast and incredible writing.” Further plans for Dark Specter 2 will be announced later this year. In the meantime, the Dark Specter team is relishing in their recent success and hoping for the right circumstances to turn this short into a series.