North Suburban increases its expertise and support for the North Denver community. 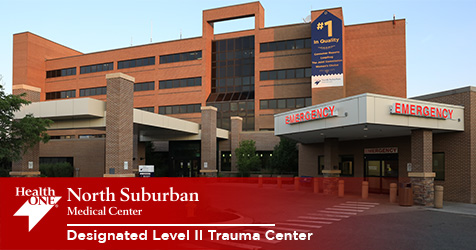 “North Suburban prides itself as a center of excellence for our community,” said Daphne David, President and CEO of North Suburban Medical Center. “With the level II trauma designation, we are now able to serve our community members when they need us the most, by restoring their health and function after serious injuries while providing world-class trauma care close to home.”

The trauma program at North Suburban has been in development for several years, and prides itself for comprehensive standardized trauma care through a team of experts who specialize in the treatment of complex traumatic injuries and are available 24/7 year round. In addition to expanding the clinical expertise and teamwork in trauma management, North Suburban also increased its capacity by opening a new state-of-the-art modern intensive care unit with 12 additional beds in 2019.

“All of the life-threatening traumatic injuries that once required transfer to other hospitals, including severe chest trauma, pelvic and abdominal injuries, gun shot or stab wound injuries - can now all be taken care of within the community at North Suburban Medical Center,” said Philip Stahel, MD, chief medical officer at North Suburban Medical Center. “We pride ourselves for having recruited the only fellowship-trained orthopedic trauma surgeon in north Denver, Dr. Darryl Auston, who is an expert in restoring complex high-energy fractures and soft tissue injuries.”

In addition to the medical and surgical expertise in place, the trauma program at North Suburban Medical Center also focuses on injury prevention. North Suburban colleagues work to identify injury trends in the service area and develop educational programs to help keep the community safe and protected from preventable injuries. In recent years, North Suburban has educated hundreds of community members on how to stop bleeding during emergencies, provided education to local EMS agencies on how to manage injuries in the field, and hosted several educational events for local residents in several other areas such as fall prevention, teen driving safety, and other areas of injury prevention.

“As a designated level II trauma center, not only are we empowered to save lives after major trauma, but we are also called to partner with our community members to prevent injuries,” said Ellen Duran, RN, injury prevention coordinator at North Suburban Medical Center. “Educating and connecting with children, parents, and older adults in the community to keep them safe is one of the most rewarding elements of our work for the community.”

About North Suburban Medical Center
North Suburban Medical Center is a 157 bed, level II state designated trauma facility with a level II NICU, cardiac catheterization services, and primary stroke and sepsis certification by The Joint Commission. North Suburban strives to meet and exceed the needs of the surrounding communities by also providing two free standing emergency departments and one ambulatory surgery center. North Suburban has more than 850 employees and 800 providers on medical staff and excellent quality outcomes. North Suburban is one of just two hospitals in the state of Colorado to be named a Top Performer on Key Quality Measures each of the last five years. North Suburban has been honored by the Women’s Choice Awards as one of America’s Best ERs, one of America’s Best Hospitals for Patient Safety, has been awarded high ratings from The Leapfrog Group in recent years, and has received several five-star awards from Healthgrades. North Suburban is proud to be a part of the HealthONE system of hospitals that earned the ranking as the #7 corporate philanthropist in the metro area and was the only hospital system ranked in the top 10. HealthONE contributed more than $1.5 million in 2018 and supports over 150 organizations through cash and in-kind donations.
Contact
HCA/HealthONE
Betty Rueda-Aguilar
303-453-2762
NorthSuburban.com