America's leading college and high school esports conference comes back to Boston with an all-star line-up of esports educators, players, professionals, and industry experts discussing the next hottest sector in video gaming and popular entertainment. Over 45 speakers and 38 panels in Boston's historic Park Plaza Hotel on February 26, 2020, the day before Pax East Gaming Conference. 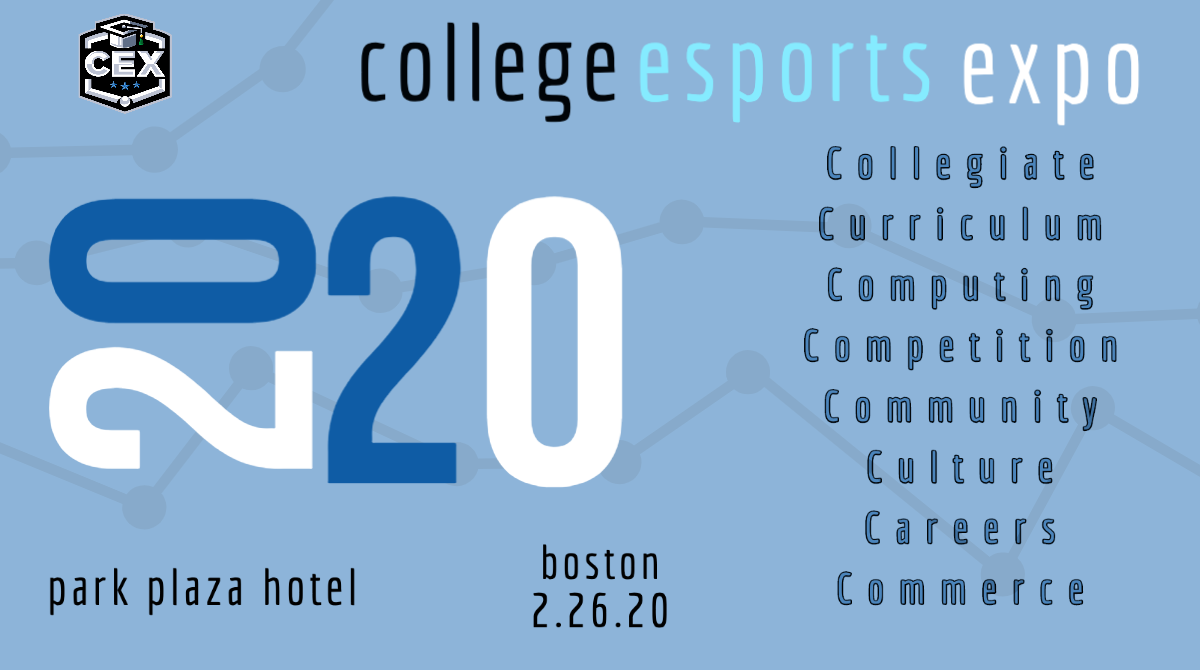 Boston, MA, February 13, 2020 --(PR.com)-- Back this February, CEX is the intersection of esports, academics, collegiate sports, and careers.

The third annual College Esports Expo (CEX), returns Wednesday, Feb. 26, bigger than ever at the historic Boston Park Plaza Hotel at 50 Park Plaza. The Esports industry is booming across all mediums. CEX is the first collegiate forum in the country to discuss the significant impact esports is having on popular culture, media, education, technology, entertainment, and professional sports.

According to Forbes, esports surpassed $1 billion in earnings in 2019 and reached an audience of 443 million across the globe. By the end of 2020, revenue is projected to be $1.48 billion, with an audience of 589 million. And esports growth isn’t just at the professional level. Across the college - and even high school thanks to Kyle “Bugha” Giersdorf’s historic $3 million win at the Fornite World Cup - space thousands of students nationwide are seeking out and forming gaming clubs.

Kevin Hoang, Director of Student and Education Programs at the live streaming service Twitch, believes that CEX is “Building the next generation of executives in the esports business.”

This year the expo will feature Kurt Melcher, the NCAA’s Strategic Advisor for Esports and founder of the first collegiate esports program in the U.S., as a keynote speaker. Also speaking are executives from FaZe Clan - the world’s most popular esports team. FaZe Clan affiliates have over 24 million social media followers. They are the number one esports organization by social following as of 2019.

Other speakers include Senior Leadership from the U.S. Army, leading administrators from Division One Esports programs, top esports events operators, infrastructure and technology leaders, pioneers of esports curricula for the high school and college level, and top players and coaches from all levels of play.

The event will be hosted one day before 60,000 gamers and executives converge on the Boston Convention Center for the largest gaming convention in America -PAX East.

The College Esports Expo is the first event of its kind in North America, and it was launched in 2017 by esports faculty and students at Emerson College. Past speakers came from organizations such as ESPN, the Overwatch League, Twitch, and professional players from NBA2K and MLS.

In line with industry expansion, CEX has experienced exponential growth from previous years. The expo is introducing a new four-track program that covers all areas of interest in the industry. Tracks in Academic & Program Management, Lifestyle, Technology, and Player Performance helps CEX cover a broader range of verticals of the esports business. Educators provide a specialized curriculum to nurture the inherent connection between esports and STEM. Students from high school and college bring their player skills and futures as industry leaders. Companies and other stakeholders deliver the infrastructure and technology needed to keep the ball rolling.