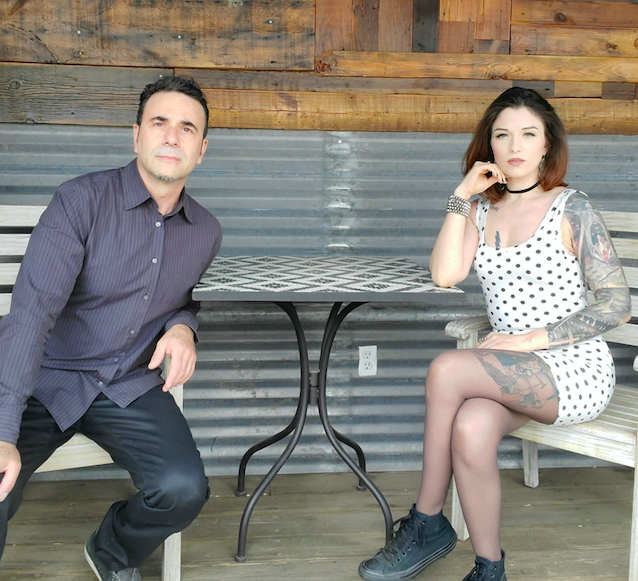 Los Angeles, CA, September 29, 2020 --(PR.com)-- Composer and producer Jay Condiotti has been on a musical journey since he started playing guitar as a nine-year-old in his native Bronx, New York. That journey has led him from Manhattan to LA, scoring music for film, television and commercials heard by millions, and now to the Pacific Northwest and the creative collaboration of a lifetime with his wife, Brooke.

But in March, as COVID-19 hit, Condiotti’s career felt like a dream deferred. He had met Brooke four years earlier in the clubs of Spokane, Wash., after moving there in 2013. He was a guitarist for hire, playing in bands and writing music for TV series like Shameless, America’s Top Model and others. She was a bass player and aspiring singer-songwriter. They married and started a family in Spokane, which had a thriving local music scene. Jay even converted an old brewery into a state-of-the art recording studio and Airbnb, hoping to serve West Coast artists.

Then, the pandemic shut it all down. Bands that couldn’t play live shows couldn’t afford to record. Jay had a fully equipped studio sitting empty. He and Brooke had two children to provide for. His royalties were strong thanks to his work on syndicated TV properties like Extra and Judge Mathis. On America’s Top Model, between five and 15 of his original tracks could be heard on any given show. But there was no revenue from the studio and no opportunities to play out locally. His income was down more than 25 percent, but his expenses, both from the studio and his growing family, were not. Like so many in the industry, the Condiottis were worried.

“It’s hard to create when you have the pressure of having to pay the bills and put food on the table – but unfortunately, that’s the reality that so many creatives are facing this year,” said Jay. “In our case, what looked like a challenging period for us ended up being the beginning of something we always wanted to do together, but we could not have pulled it off without some sort of financial solution.”

It wasn’t until Jay connected with Sound Royalties, specializing in royalty-based financing for music creatives, that the fog of uncertainty lifted. He heard about Sound Royalties through ASCAP, his Performing Rights Organization, and knew the company worked with Grammy nominees and winners like Rich Robinson, Pitbull, DJ Khaled, Makeba Riddick, Wyclef Jean, Sonia Leigh and others. He liked Sound Royalties’ policy of protecting copyright ownership for creative artists, the flexibility to choose from customized funding options and the ability to receive pass-through royalty income while paying down an advance.

“Jay could have sold off some of his royalty copyrights instead of financing, but our funding model allowed him to retain ownership and not relinquish the lifetime income those copyrights represent,” said Alex Heiche, CEO of Sound Royalties. “Artists need to know that there are safe alternatives to selling that don’t put your royalty assets at risk.”

This summer, Condiotti worked with Sound Royalties to secure a capital advance – his first ever – with a payback schedule spread over one year, taken from his quarterly royalty income. The advance provided a financial cushion to sustain their family through a difficult period, but there was another, profoundly personal benefit for the creative couple. They finally had the time and opportunity to focus on a project the two had long dreamed of – their own band, Silver Smile.

Brooke describes the collaboration with Jay as the culmination of her own musical journey. After performing in multiple bands, she can now concentrate on her songwriting, inspired by the love, support and talents of her producer husband and the unexpected blessings of an otherwise tumultuous year. The result has been an outpouring of original songs that have been waiting a lifetime to be heard.

“It feels like a dream to work with Jay on our own music,” said Brooke. “It’s like I’m finally presenting myself to the world as an artist, and to do that with my husband makes it even more meaningful. I hope that anyone who hears these songs feels uplifted, because that’s the spirit behind this music.”

For Jay, who has worked with 12-time Grammy-winning producer Arif Mardin (Aretha Franklin, Whitney Houston, Chaka Khan, Nora Jones) and the Oscar, Tony, Grammy and ASCAP Founders Award-winning composer and lyricist Stephen Schwartz (Wicked, Godspell, Pocahontas, The Hunchback of Notre Dame), there has been no more fulfilling creative partnership than Silver Smile. “It’s a kind of Dave Stewart-Annie Lennox collaboration,” he said of the couple’s work in the studio, often combining Jay’s music with Brooke’s lyrics and vocals.

The first four-song Silver Smile EP is currently available on Spotify, iTunes, SoundCloud and Amazon Music, and there is more to come. Jay is also working with the Spokane band and Universal Music artists Blazar, as well as with indie artists Jerad Finck and HEwas on a song for Afroman. In time, J Bones Musicland, the studio and attached Airbnb, will host the West Coast bands and producers it was intended to serve.

“I feel very fortunate to have found a way to get through this year and have the means to devote time to creating music with Brooke,” Condiotti said. “Creative artists will prevail through all this because there are so many emotions to be processed and that’s what makes great art, but it helps to have companies like Sound Royalties make the numbers work, especially now.”

About Sound Royalties
Sound Royalties, LLC is a privately-owned specialty finance firm that helps music industry professionals fund personal and professional projects without ever taking ownership of their copyrights, allowing for pass-through income, and empowering creatives to choose from a variety of flexible pricing options. The company's core business is offering royalty advances of anywhere from $5,000 to the tens of millions. It does this by advancing artist, producer and songwriter royalties paid through music labels, distributors, publishers and PROs such as BMI, ASCAP, SESAC, SoundExchange and many more. Sound Royalties works with a wide range of music industry professionals, including GRAMMY Award winners, platinum recording artists and notable music industry executives in every genre. Learn more at https://soundroyalties.com.
Contact
Sound Royalties
Lauren French
919-675-3329
https://soundroyalties.com