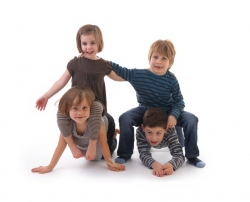 Glory Hammes is American, raised in Santa Monica. She is fluent in German, as she lived in Germany for several years. “My husband is German and before our son was born, we decided that German would be our family language. After looking at the studies done on bilingual children, we saw it as an opportunity to raise our son with two languages,” says Hammes.

Bilingual families need support networks for their family language. In fact, building a support network is probably the most underestimated success factor in raising bilingual children. Bilingual families can benefit from exchanging information about teaching techniques and gather new ideas from. It also ensures future play dates that will provide children with the ultimate language teachers - other kids.

“Spanish is very common in California, but German isn’t. So when people hear us speaking German, they usually ask ‘What language is that?’ The club has really helped us to feel more ‘normal’ and is awesome for the kids,” says Hammes.

If you are interested in joining the German-speaking Family Club, call (562) 252-3830 or visit www.deutschsprachig.com.