In Évora, the Artist Santiago Ribeiro Exhibits for the First Time Since the Pandemic, While in Italy a Video Circulates Dedicated to the Portuguese

Santiago Ribeiro prepares for his new exhibition in Portugal, in Italy, three italians, Annalina, Vincenzo and Maurizio pay homage to Ribeiro with a hit video. 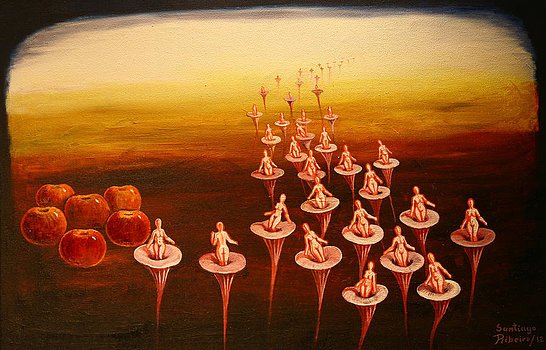 Parigi, France, April 23, 2021 --(PR.com)-- The city of Évora in Portugal will be the next destination for Santiago Ribeiro's surrealist paintings, an event that marks his first appearance in this Alentejo metropolis at the end of April.

The initiative comes from the company MatosCar, an automotive group present in the Portuguese cities of Guarda, Fundão, Castelo Branco, Portalegre, Évora and Beja; Official representatives of 24 brands. This time, the exhibition will be permanent because the entrepreneurial group has decided to buy the works of which a dozen will be exhibited in the new structures of Évora and can be seen by several thousand people.

In the meantime, in Italy, the images flow into a video promoting Ribeiro's surrealist art produced by the A.S.A.S Poet Prize Vincenzo Calì, the journalist and art curator of Campania Annalina Grasso and the actor Maurizio Bianucci. The video accompanies the promotion of the exhibition of the Portuguese artist, founder of the New Surrealist Movement.

The video which currently has over 90,000 views on Instagram thanks to the persuasive and mysterious voice of Italian actor Maurizio Bianucci, who has appeared in important and successful series such as Suburra, numerous theatrical performances and drama RAI and who recited the poem in the Italian version entitled, "Profluvi" by the Sicilian poet Vincenzo Calì, while the English version "Flows" is recited by the journalist Annalina Grasso, creator with Calì of this cultural initiative which is also successful abroad.

In fact, the video that frames the works of the international artist, through restless and alienating words, shows us what we would probably be like if we totally released our subconscious and our impulses: naked and blind, not really free, but lost; euphoric, not happy. The video questions the value of free will, willpower and the true meaning of the word freedom.
Contact
900letterariomagazine
Annalina Grasso
+393333332893
www.900letterario.it/