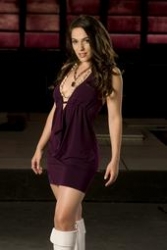 CineMax's “Zane's Sex Chronicles” is a recent addition to the festival slate, the CineMax presentation of the new original series will preview at The Urbanworld Film Festival. In association with New York Times best-selling author Zane and Oscar® nominee and two-time Emmy® winner Suzanne de Passe, this new series will debut Friday, October 10 (midnight ET), with new episodes on subsequent Fridays at the same time, exclusively on CineMax. This new urban late-night series -- based on the wildly popular book series by the same name -- follows heroine Patience James and her girlfriends Maricruz, Lyric, Eboni (Christina DeRosa) and Ana Marie as they take on their lives in the big city, look for love and empower themselves -- both in and out of the bedroom.

Christina DeRosa will be wearing for the evening a dress by Tal Sheyn Designs, bag by Timmy Woods, and shoes by Shoes For The Stars.