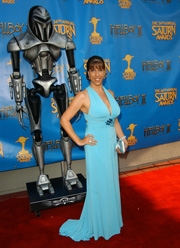 Los Angeles, CA, September 19, 2008 --(PR.com)-- DeeDee Bigelow is an up and coming actress. DeeDee Bigelow has been in episodes of Shark, My Name is Earl and CSI:NY. She was interviewed on blogtalkradio.com on The Mortalvampire on Sunday evening and she had the chat room and the callers in stitches.

She is an only child and when asked if she ever wished she had siblings, her response was “I never thought about it.” Guess she wouldn’t because she grew up on a large ranch with horses, dogs and other fourlegged critters. She had all the siblings she needed they were just four legged.

DeeDee will be appearing in several more films in the coming months.

And she is currently attached to several other projects.