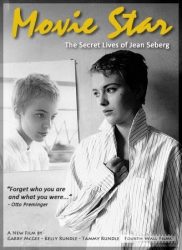 “They have routinely turned down interview requests over the years, including invitations from national television news personalities and programs,” said producer Kelly Rundle. “Other documentaries have told a portion of Jean’s story, but thanks to Garry’s interviews and research this film will shed light on the person behind the celebrity.”

"Movie Star: The Secret Lives of Jean Seberg" (the film’s working title) is set for release by Fourth Wall Films in the fall of 2009.

“We are pleased to be working with Garry,” said producer Tammy Rundle. “His insights into Jean’s early years and family life will dispel some of the myths that cloud the reality of her life.”

Born in Marshalltown, Iowa in November 13, 1938, Jean Seberg declared at an early age her intention to become a movie star. Director Otto Preminger plucked her from obscurity in a nation-wide search and cast her as Joan of Arc in "Saint Joan".

The documentary will examine Jean's beginnings in small-town Iowa, her career ups and downs, her marriages, and her ongoing humanitarian and social justice efforts. Seberg was both acclaimed international actress ("Lilith," "Dead of Summer") and popular American star (Paint Your Wagon, Airport).

In the midst of the turbulent civil rights era in America, Jean’s political activism caught the attention of J. Edgar Hoover. When the F.B.I. attempted to discredit her by planting a false story about her pregnancy in national publications, Jean became so distraught that her baby was born prematurely and died.

Changed by the tragedy, she began a downward spiral that led to her untimely death in 1979 in Paris at the age of 40. Ruled a probable suicide by French authorities, questions linger among her close friends regarding the possibility of foul play.

The Rundles have previously produced "Lost Nation: The Ioway" and "Villisca: Living with a Mystery". They are currently in production on "Country School: One Room – One Nation".

Garry McGee previously co-produced "The Last Wright", a documentary about the last remaining Frank Lloyd Wright hotel in Mason City, Iowa. In addition to "Jean Seberg: Breathless", he is also the co-author of "Neutralized: The F.B.I. vs Jean Seberg," "Doris Day: Sentimental Journey," and other entertainment industry-related titles.

Fourth Wall Films, a film and video production company owned by Kelly and Tammy Rundle, was formerly located in Los Angeles, California. The husband and wife duo is now based in Moline, Illinois where they focus on Midwestern historical documentaries.