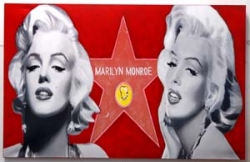 Los Angeles, CA, March 30, 2009 --(PR.com)-- Andy Warhol's former assistant, Pop Artist Steve Kaufman, makes the following statement: "My office has received many phone calls, emails that I’ve died, and many flowers from fans. I had a major stroke. My cholesterol was 576, I use a walker, but I’m alive.

The Hospital tells me I flat line died. The night before I had 1 pizza pie, that night, I saw spots and then images of my life. When I awoke up, I was on the floor I was paralyzed on one side of my body.

2nd Major Stroke I woke up in Las Vegas and being paralyzed I couldn’t get into a wheel chair.