Rock Demarco travels the world creating giant celebrity paintings live for concerts, events and has appeared on all the major TV networks. www.RockDemarco.com 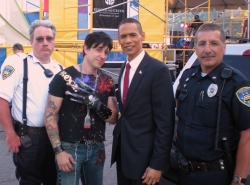 Orlando, FL, July 21, 2009 --(PR.com)-- Paint flies mid-air to high energy music as speed painter Rock Demarco transforms blank canvas into giant works of art in minutes. Never a fan of mild mannered art, Rock instead invites his viewers to join him on a wild ride of imagination as the expierience the creation of art live in front of their eyes. Rock has opened for music legend Alice Cooper, superstar comedian Dana Carvey, has performed for a live audience of 200,000 people and the list continues. Rock has performed on Good Morning America with Diane Sawyer, and has been a featured guest on many TV shows throughout his career. In 2007 Rock performed at the star studded premiere of Pirates of the Caibbean 3 for Disney. His artwork is collected by celebrities and art enthusiasts around the world. In 2010 Rock Demarco will be on his "Rock the World" tour with live painting show dates scheduled in Europe, Stockholm, Russia and South Africa. A theatrical release movie based on Rock's wild life will be released to coincide with the tail end of Rock's World Tour. His original works of art will be sold at the live performances. If you are interested in booking Rock for your concert or event contact his management team Book It Inc at Universal Studios 407-469-9407