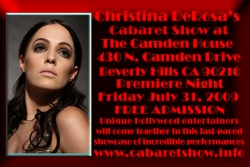 Beverly Hills, CA, July 27, 2009 --(PR.com)-- Up and coming Film and Television Star Christina DeRosa will perform in her own show “Christina DeRosa’s Cabaret Show” at the Camden House along with many Hollywood guest star performers including Celebrity Show Host, Joey Medina in an evening of exquisite entertainment and musical debauchery. “Christina DeRosa’s Cabaret Show” will change the look of Beverly Hills’ entertainment with an outstanding, energetic, and creative new Cabaret Show featuring young and high–energy; out–of–this–world acts that work the crowd into a frenzy. Unique talents, including, singers, dancers, comedians, magicians, and musicians are frequently added to the line up for the reoccurring show every other Tuesday.

Christina DeRosa, you may recognize Christina from one season of the groundbreaking TV series, 'Sex Chronicles' by Zane where she played Eboni, in all twelve episodes. You can currently see Christina in the new film release, Extreme Movie with Michael Cera. Christina also appeared in smash–hit shows including, 'Worst Week', ‘Everybody Hates Chris', '‘Reno 911!', 'General Hospital', and 'Entourage'. Christina is also the spokes model for ‘Shoes For The Stars', "A Unique Shoe Design for a Unique Woman" Additionally, Christina was featured in the July 2007 issue of Playboy as 'The After Hours Babe of The Month', Runway Magazine, Rod and Custom, La Confidential, Ok!, Star, Instinct, and People En Espanol. On July 31, 2009, Christina DeRosa will go back to her NY roots and give her homage to Broadway legends.

But, not just an homage to Broadway legends, Christina DeRosa rolls out the red carpet for many bright new Hollywood talents such as:

Celebrity Joey Medina, is best known as being one of the stars of Paramount Pictures “The Original Latin Kings of Comedy,” with Cheech Marin, Paul Rodriguez, George Lopez, and Alex Reymundo. And the Star and Morning Show Host of The Morning Invasion on Latino 96.3 FM in Los Angeles. He recently starred in Martin Lawrence’s 1st Amendment Stand–up comedy television show. Joey also recently Executive Produced and Starred in his own comedy special and tour titled “Latin Palooza.” Joey recently co–starred in the feature film “Zombie Strippers” with Jenna Jameson and Robert Englund (Freddy Kruger). He also co–stars with movie star, Danny Trejo and B Real from the rap group, Cypress Hill in an upcoming horror film titled “Devil Inside. His first screenplay, “El Matador” in which he made his directorial debut, swept the 8th Annual East Los Angeles Chicano Film Festival in 2002 by winning Best Film, Best Director and Best Acting awards.

Pianist and Music Director, Cody Gillette is known for his musical passion, sensitivity, and versatility, described as the one they call on to play "From Bach To Bacharach, From Rock to Rachmaninoff.” Currently his show "Schoolhouse Rock Too Live!" performs at the Greenway Theater. Cody recently cooperated in the California Philharmonic production of Porgy and Bess, at the Disney Hall. Also, he performed with Michael Allinson, who replaced Rex Harrison on Broadway NY in My Fair Lady. Cody's band, drummer Erick Tatuaca, bass player Adam Cohen, and Guitarist Sherman Pascoe creates something that is not only unique, but also out of this world, that will greatly complement Christina’s soaring vocal melodies.

Violinist Chris Woods, wants you to feel the force of his fiddle with his musical group, Sonication featuring Singer Lauren Smith who performed at Stevie Wonder's sold out concert "House Full of Toys Benefit" at the Nokia LA Live singing with Stevie Wonder, and featuring cellist, Adrienne Woods who toured with the Jonas Brother and performed with Kayne West.

Dancer Reyna Maria Godoy, is a recent transplant from New York City to the City of Angels. Reyna has danced professionally in live stage performances, music videos, and commercials since graduating from NYU. You can catch her sexy burlesque show with The Speakeasies every Wednesday night at Townhouse Cocktails in Venice."

Dancer Olivia Maria Lopez, trained as a professional ballet dancer at the Performing Arts School for the Bolshoi Theatre & studied acting in London & New York City. She has recently arrived to Los Angeles to pursue her dreams.

Dancer, Chris Downey, is a recent graduate from the USC with a B.F.A. in Theatre. Chris has choreographed and danced for numerous artists and shows including Malcolm in the Middle, Celine Dion, Bellagio and Mirage Hotels, KSwiss, and Carnival: Choreographer's Ball. Chris recently developed his own company called Asher Entertainment. Asher Entertainment customizes live entertainment for special and corporate events ranging from sophisticated ballroom to edgy burlesque.

Singer, Genevieve Goings, spends most of her time as the star of Playhouse Disney's "Choo Choo Soul,” donning a train conductor costume and singing soulful music for children. Before the success of the Disney Channel show, Genevieve was singing in Jazz, Soul & Hip–Hop groups in the San Francisco Bay Area. Friday, July 31st, she returns to the stage ready to entertain a grown and classy audience.

Singer, Chrys Ryan, an old school sound with a new school vibe, presents the soulful sounds of then and now. Chrys opened for Brian McKnight, Wayne Brady, JC Chasez, Jessica Simpson, and he sang at Michael Jackson’s 45th Birthday Celebration. Chrys will excite the crowd with some of his originals and his favorite Michael Jackson songs.

Standup Comedian, Max Amini, says, “Come and Laugh with Max Amini, it’s good for your soul and remember, I’m not Gay, I’m Persian.” Max performs regularly on Friday nights at the world Famous Comedy Store in Hollywood. You have seen him on TV shows such as: "Heroes,” "The Nick Cannon Show,” and "The Mind of Mencia".

Comedy Magician, Murray SawChuck, from VH1 Television and Las Vegas' SinCity Comedy. Murray has exploded onto the entertainment scene with the charisma, personality, and talent of a natural born star. You can’t miss him with his signature electric blonde hair, black framed Armani glasses, and his contagious smile.

About The Camden House restaurant with Patio Dining:
The Camden House brings new life into Beverly Hills fine dining. With indoor and outdoor patio dining areas, patrons will enjoy the scenery while dining on the exquisite combination of international cuisine with Persian influence. Brought to you by renowned executive chef and an unparalleled hospitality staff, this restaurant will be the ideal destination for business people during the day and the A–List crowd at night.

Runway Magazine LA is most famous as a presenter of images of high fashion and high society, but it also publishes writings on art, culture, politics, and ideas. It has also helped to enshrine the fashion model as celebrity. Advertisers from multiple genres all over the West Coast ensure involvement with the magazine with their wide distribution of over 75,000 prints per issue.

Catalyst Productions relies on a managed risk model to develop, Finance, produce and distribute independent feature films. Investors now have the ability to peer inside the Hollywood circle to have private access to review, compare, and invest in the top opportunities in films and beyond.

James Buccelli and Christine Johanson – James and Christine of Runway Magazine LA and Catalyst Productions LLC has taken Hollywood by storm. Deal making, day shaking, 100% energy James Buccelli and Christine Johanson won’t stop until they have accomplished what they have set out to accomplish–closing film deals, producing, and making things happen. Incidentally closing hotel deals, music deals, signing artists, throwing and sponsoring events, shopping, red carpet hopping, and designing and launching a new Hollywood hotspot all while saving the world simultaneously through their love of charity.

Patrik Simpson – Network International Inc. Models and Talent discovered by a local photographer, and began a modeling career. After a short stint as a runway model in the early 80’s, he began his career in the industry, working as a Casting Assistant for Judi Keppler and Sally Pearle, two of Hollywood’s leading ladies in the entertainment arena. After opening a print division at the casting office, he knew it was time to open his own company. In 1990, Network International Models and Talent was born! The concept was to create an international scouting headquarters, dedicated to seeking out potential models and actors; to design and produce highly marketable portfolios and Zed–Cards, and to present them, along with previously established clients, to the motion picture and fashion industries in the United States, Europe, and Asia.

Pol’ Atteu – Haute Couture is a high fashion Haute Couture designer for over ten years with his world famous boutique located in the heart of Beverly Hills. Pol', was friend and personal designer to the late Anna Nicole Smith, and guest starred in the Anna Nicole reality show. He created her spectacular gown for the VH1 Big in 04 which landed her on Star Magazine s Best Dressed list; and has appeared as a celebrity fashion designer on Dr. Phil. Pol' was inducted into American history by creating the Inaugural ball gown worn by California’s former First Lady Sharon Davis. The gown was subsequently donated to the California State Capital Museum, joining a prestigious collection of gowns worn by former First Ladies.

Jacob – Shoes for The Stars A big, red heart rests on a black background. No name. No other design. It's simple. Modest. Understated. Yet this unassuming logo represents one of the best–kept secrets in Hollywood. It's “Shoes for the Stars.” Located in the heart of Melrose Avenue, in Los Angeles, California, this shoe store is more than a place to find the average “perfect pump.” It's a place to create personal style. In addition, the man to do that is Jacob, the creative genius and designer of the footwear that makes a stir at photo shoots, press events, and red–carpet catwalks all over Hollywood. 25 years in the fashion/shoe, industry has been well spent for Jacob. With one of his custom–designed styles, the “little black dress” can be taken up to a whole new level. In fact, most of his styles will take a client up several inches. Flats are well, “flat,” in Jacob's world. His clients enjoy a more “elevated” experience. Brittany Spears, Beyonce, Eve Longoria–Parker, Erykah Badu, Sasha Campbell actually enjoyed 12” of height on her last world tour thanks to him. The heart on the business card is no mistake. Shoes are Jacob's passion and love

Kobico and Rika Hair and Makeup Specialists – 7556 Salon are a team of experienced professionals, that can accommodate all your beauty needs. Offering hair and makeup, they are a mobile salon! Perfect for weddings, parties, formals, and entertainment events. With combined experience of over 35 years in hair and makeup.