Celebration, FL, September 15, 2009 --(PR.com)-- From television production company Lyons Entertainment, Executive Producer David Lyons (Hog Heaven, CREEPERS) and Producer Lauren Alvarez (Meet My Folks, The Surreal Life, The Osbournes) comes The Ultimate Body, a new competition reality television series that pushes the boundaries of fitness and discipline. Thirteen men and thirteen women will be put through rigorous physical training and dieting challenges to compete for the chance to be crowned “The Ultimate Body.” Winners of this televised fitness and bodybuilding competition will each earn a cash prize of $50,000 provided by the Anytime Fitness chain of gyms and by Gaspari Nutrition. Winners will also receive a photo spread in Muscle Magazine International and other prizes including an all expense paid vacation courtesy of Hyatt Resorts Hawaii and Two Rivers Travel Agency .

An open casting call for The Ultimate Body will be held on Saturday, October 17th from 11AM to 6PM at the Ramada Orlando Celebration Resort & Convention Center, located at 635 West Irlo Bronson Highway, Kissimmee, Florida 34747. Prior to the date of auditions for The Ultimate Body all candidates must fill out an online application at www.theultimatebodytvshow.com. An application must be on file with Lyons Entertainment in order to be considered on the day of auditions. Applications are also available at the door the day of auditions (late fee will apply).

Talent currently attached to this project includes winner of the Mr. World and Mr. USA titles and emcee of The Mr. Olympia contests, Bob Cicherillo who has signed on as host; with IFBB Bikini Pro and top fitness supermodel Marzia Prince, IFBB Hall of Fame bodybuilding legend Rich Gaspari and Natural Mr. Universe, Mr. America and Mr. California Doug Burns signed on as judges. Other panel members for The Ultimate Body will include Brad Homan, DO, Celebration Florida’s Orthopedic & Sports Medicine Institute’s Director of Sports Medicine and Chief of Surgery for Florida Hospital in Celebration, who has signed on as Medical Advisor. Dr. Homan will also contribute a two minute segment in each episode and chiropractor, Dr. Ben Lerner, who is America’s maximized-living mentor and author of the New York Times best selling book Body by God.

The Ultimate Body is inspired by executive producer David Lyons’s own inspirational story of beating the odds. Diagnosed with Multiple Sclerosis in 2006 at the age of 47, David Lyons was told by doctors that he would likely lose his ability to walk. Rather than give into his illness and become sedentary, David decided to become a competitive bodybuilder, founding the MS Bodybuilding Challenge and competing in body building competitions. On August 22, 2009 David Lyons became the first person with Multiple Sclerosis to compete in a Level 5 NPC Bodybuilding Competition, taking home the trophy for “Most Inspirational Competitor.” He has also been asked to guest pose at next year’s Natural Mr. Olympia competition in Chicago, a tremendous honor, by former Natural Mr. Olympia John Hansen. Proud of his achievements so far, David is never satisfied to rest on his laurels and exclaims, “Next year I win!” He has already begun his training for next year’s bodybuilding competition. David Lyons is an ideal example of what the human body can achieve, and he expects no less from the competitors who will be cast to compete on The Ultimate Body. “We are looking for thirteen men and thirteen women who are willing to give their all, and ultimately find that center of strength to push forward when the going gets tough. We will be looking for this quality at our open audition event on October 17th,” states Lyons.

For directions and additional information regarding this one day only open audition event for The Ultimate Body call 1-877-467-5786 or visit www.theultimatebodytvshow.com. 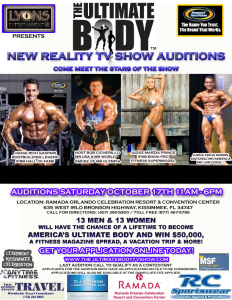