J.W. Pepper recognized for support of music education in California. 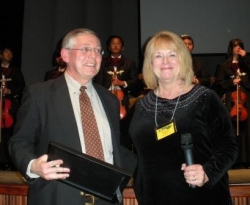 Santa Fe Springs, CA, February 03, 2010 --(PR.com)-- At the 2010 conference of the California Association for Music Education Southern Border Section, J.W. Pepper was presented with the organization's distinguished Industry Leadership Award. Each year the CMEASBS awards both a legislator and an industry partner the honor "in recognition of your support of music education." Merryl Nelson, past president of the Southern Border Section, presented Pepper with the plaque.

Vice President Sam DeRenzis accepted the honor on behalf of J.W. Pepper. DeRenzis has a long history of working with southern California music educators and currently serves as Pepper's regional marketing manager for southern California, New Mexico and Hawaii. According to DeRenzis, during the presentation Pepper received "a very warm and extended round of applause. Merryl cited several examples of our service to the SBS along with our service and support on the statewide level of the California Music Educators Association." DeRenzis added he was especially touched to hear the general membership in attendance give such rousing support as Pepper received the award.

J.W. Pepper®, the leading retailer of sheet music in the world, has been serving musicians for over 133 years, with 14 locations across the country. www.jwpepper.com