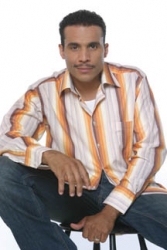 Los Angeles, CA, January 11, 2007 --(PR.com)-- This Sunday, January 14, marks the network premiere of “Black Man Revealed”, a “talk-ish” show which explores myths and truths from the eyes of brothers of various ages, educational backgrounds, and economic strata who get together for a game of dominoes and eye opening conversation in a swank loft with city views atop the Hollywood Hills, airing on TV-1 from 7PM to 8PM Pacific, hosted by accomplished stand-up comedian and actor, David Arnold. The premiere episode of Black Men Revealed will repeat that same night at 11 PM. Regularly scheduled replays of the series will be on Sunday nights at 10 PM and Wednesdays at 7 AM.

If David’s name is familiar, it’s probably because he has many high profile television credits including, appearances on The Tom Joyner Show, several appearances on BET’s ComicView, HBO’s Entourage, “The Tonight Show with Jay Leno,” “Comics Unleashed with Byron Allen” and Comedy Central’s “Laffapalooza” with Jamie Foxx, but is best known for performing his hilarious stand up routines in comedy clubs and colleges around the country. David has also performed at the Montreal “Just for Laughs” Comedy Festival; a segment entitled “The Masters.”

In the Los Angeles area, Arnold can be seen getting his funny on weekly on Saturday nights as the host at the Comedy Union, and intermittently hosts Chocolate Sundays at the world famous Laugh Factory. In addition, David performs at The Comedy Store, The Improv, and Ice House… basically anywhere there is comedy, there is David Arnold. He continues to tour when he is not busy filming.

David has a fresh style of family storytelling and relationship insight that will serve him well as the host of his new show on TV-1. “It’s like spying on men while they sit and play dominoes. You never know what you’ll learn,” says David about the show’s unique format.

From a talented family, David, a Cleveland, Ohio native, and the nephew of Eddie Levert (O’jays), has also written, directed and starred in three short films, entitled, “Because My Stand Up is Not Enough!” “Till Death Do Us Part?” and “Garage Sale.” His films have been selected to screen at many film festivals, including the 2003 Hollywood Black film Festival, the 2004 Pan African Film Festival and the 2005 Boston Film Festival, where he picked up the award for Audience Favorite. Arnold has spring boarded himself into an entirely different category and is now in development with two feature films to be produced by his production company Manor House Entertainment. Also under Manor House Entertainment, Arnold is set to release his latest DVD “Light Skin-Dark Skin”, a collective effort with fellow comedian, Rodney Perry. To add to his arsenal of works, Arnold also released a CD entitled “Cause I Gotta go to Work in the Morning" on the Uproar Entertainment label which is available in all major music outlets across the country. While there is more revelation to come, we’ll just have to watch and see exactly what’s next from this prolific entertainer. To see what David is up to, visit www.davidaarnold.com or www.myspace.com/davidaarnold.

David is available for interviews.