Thurston, NE, May 23, 2011 --(PR.com)-- Thurston Manufacturing Company announced today that 2011 is its 40th Anniversary. Incorporated by Wayne A. Jensen of rural Thurston, NE in April of 1971, the company began with six local stockholders and first saw noteworthy growth when it launched the BLU-JET fertilizer application and tillage equipment lines for the agricultural industry. Innovative designs and quality manufacturing are the hallmarks that continue expansion to this day.

Wayne Jensen grew up in the Thurston community and was a farmer, cattle feeder, and salesman for a company selling livestock nutritional supplements. The aptitude for increasing his customers' feed efficiencies with quality products, and making innovative improvements to his own farm machinery, sparked his interest in manufacturing items of his own. Operations began in a large grain storage building located in Thurston. The first product manufactured was the Self-Coupling Hitch for tractors and wagons. A brand name and logo were then devised for the products – Blu-Jet. "Blu,” the color of the town high school mascot, became the signature paint color and “Jet” to represent fast and sleek, like the Self-Coupling Hitch.

Wayne's son Layton joined the business soon after start-up to assist in business development and product design; the company began production of fertilizer injection tool bars for applying anhydrous ammonia along with various other tillage implements. Rapid business expansion required a larger facility across town, which was completed in 1979. Three additional expansions to this facility have occurred through the years. In 1999, efforts were made to further diversify business outside of the agricultural industry with the stock purchase of Circle R Side Dump, Inc. of South Sioux City, NE. After managing multiple facilities for two years, all Circle R production and operations were combined into the main facility in Thurston. Through the years, earnings have been continually reinvested back into the organization for facility enhancements, production technology, manufacturing equipment, inventories, and key management systems.

“In the past 40 years we have had four major expansion projects,” said Layton Jensen, CEO of Thurston Manufacturing Company. “Our fifth major expansion, which will extend all three of our current buildings and add an additional building, is currently underway. This will increase our production space by 30%, and add a new painting operation and more robotic welding stations. It will put us in a leadership role for production efficiencies within our respective market segments and allow us to increase value by lowering production costs while maintaining top quality product offerings.”

The BLU-JET brand is presently being marketed worldwide with shipments to North America, Europe, Asia, Africa and Australia. Products currently being offered include Fertilizer Injection Tool Bars for applying anhydrous, liquid and dry forms of fertilizers at up to 90 feet in swath width, and Tillage products which include a variety of implements suitable for conventional, Minimum Till, No-Till and StripTill farming operations. The Circle R brand is currently being marketed in North America and was recently shown to outperform competitive brands in total cost of ownership where reliability and resale value are key elements.

Thurston Manufacturing Company currently employs approximately 90 people from Thurston (population 125) and the surrounding area. This includes a full research and development team of degreed engineers and draftsman, a comprehensive sales and marketing department, management, and production personnel. Wayne Jensen and his wife Carla are now retired and Layton Jensen is President/CEO. Today, he and his wife Carolyn (VP of Administration), along with sons Nick (Chief Marketing Officer) and Ryan (Chief Operating Officer/Controller), manage all aspects of the business.

“Nick and I are very grateful for the years of hard work and innovative problem solving that Grandpa and Dad have put in to creating this business and the tremendous products we manufacture,” said Ryan Jensen, Chief Operating Officer. “We are also very grateful for the opportunity they have given us to come back home and help run the family business. We will do our best to continue the growth and success trends they have been able to achieve. They set the bar pretty high for the 3rd generation, but I think we are up for the challenge, and I would say we are off to a pretty good start.”

Product Innovations:
Over the past 40 years products produced at Thurston Manufacturing Company have developed a reputation for their cutting edge innovation, durability, and superior quality. The innovations listed below are just a few that have been widely adopted and accepted by their respective industries:

Commemorative decals will be placed on BLU-JET and Circle R Side Dump products built during the anniversary year. BLU-JET SubTillers and 2012 model year Circle R Trailers built in June & July will be first to receive the decal. 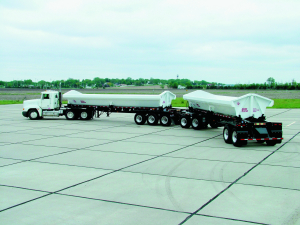 Sets of Circle R Side Dump trailer trains like the one pictured above are common in the Mountain West. Circle R trailers are often used in the construction mining and agricultural industries. They are known within these industries for their versatility, reliability and higher resale value. The AT7000, BLU-JET's 90' Liquid Injection Applicator, was introduced at the 2008 Farm Progress Show in Boone, IA. It is the first 90' liquid injection applicator in the world being produced for commercial sale.