Zach Galifianakis fans have been taking to Facebook and Twitter to find out about the DVD re-release of the special edition of "Visioneers" with free digital copy. 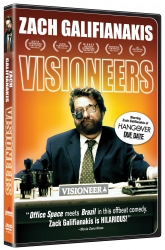 Along with Zach Galifianakis, "Visioneers" co-stars Judy Greer (TV's "Arrested Development") and indie favorite James LeGros in a movie critics called a cross between "Office Space" and "Napoleon Dynamite." Galifianakis fans have been taking to Facebook and Twitter to find out about the re-release of this highly regarded comedy.

"Visioneers" stars Zach Galifianakis as an office worker named George who's stuck in a bleary job working as a mid-level manager in the surreal Jeffers Corporation. After employees begin spontaneously exploding as a result of their uneventful lives, George's doctor warns him that if he doesn't get out of his rut he could be the next to go. As his co-workers continue to detonate, George is forced to reevaluate his mundane existence before he literally blows up.

The DVD not only contains a free digital download but other special extras including a bonus scene from George's job interview with the Jeffers Corporation and a funny Jeffers Corporate video.

The new re-re-issue of "Visioneers" was released by Xenon Pictures and Viva Pictures in Association With Fireside Film, Mayfly Films, The Syndicate and Purple Sage Pictures.