Silver Spring, MD, June 30, 2011 --(PR.com)-- Building on the momentum of its two 2011 Origins Awards, Evil Hat Productions, LLC, today announced an agreement to produce, publish and distribute a tabletop board game that will expand the company's reach beyond the roleplaying genre. Race to Adventure: The Spirit of the Century Exploration Game, designed by Evan Denbaum, E.K. Lytle and Christopher Ruggiero, is an easy-to-learn pulp adventure game based in the Spirit of the Century universe. The richly themed "action-selection" game can be played in as few as 20 minutes, and its variable setup and levels of depth allow for infinite replayability.

"We wanted our first foray into board games to be highly accessible and fun, while taking advantage of the intellectual property Evil Hat has cultivated during the past few years," said Evil Hat Co-President Fred Hicks. "What I love about Race to Adventure is it can serve as an entry point for younger and casual gamers into the 'action-selection' genre while also having ample strategy to appeal to a wide range of players."

Race to Adventure: The Spirit of the Century Exploration Game is scheduled for a late 2011/early 2012 release. It will be a heroic companion-piece to the much-anticipated Zeppelin Armada combat card game by veteran game designer Jeff Tidball, targeting a similar release timeframe. Like Race to Adventure, Zeppelin Armada will also feature characters from the Spirit of the Century universe.

"This is just the start of what you can expect to see from Evil Hat in the months to come," said Hicks. "The time is right to move into board and card games, and we’ll be leveraging our roleplaying game catalog as complementary tie-ins to those games. Together, they'll create a gaming experience greater than the sum of its parts. Our motto is 'passion makes the best games' and you're going to feel that passion poured into our upcoming offerings."

About Race to Adventure: The Spirit of the Century Exploration Game
Each year, a worldwide scavenger hunt brings together daring adventurers from all parts of the globe—members of the famed Century Club. Their journey is filled with danger, excitement and wonder as players race to be the first to complete every mission, stamp their passport as proof in every location and cross the Empire State Building finish line first. Snatch a golden eagle egg from a Himalayan mountain peak, escape the Mummy King, rescue a prisoner from Atlantis and much more in this family adventure game playable in as few as 20 minutes.

About Evil Hat Productions
Evil Hat Productions believes that passion makes the best games. It is this passion for gaming that raised Evil Hat to its acclaimed position in the RPG community. Our games can be used to build the best kinds of role-playing experiences—full of laughter, storytelling and memorable moments. Today we don't just run games, we don't just make them, we work with you to make your play the best it can be—the kind that upholds and gives birth to passions of your own. That's the Evil Hat mission, and we're happy to have you along on it. 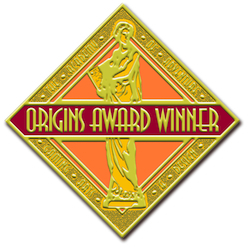