Independent film Leave it on the Floor starring actor, singer, dancer and musician Ephraim M. Sykes of stage, television and film has a cult following with U.S. film festivals. 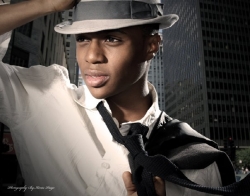 The independent musical had its world premiere this summer at the Los Angeles Film Festival. From Los Angeles the film headed to festivals in San Francisco and Philadelphia with hopeful dates in New York later in the year.

When asked what attracted him to this role Ephraim replied, "I'd never done a lead role before and when I heard about Kim Burse and Frank Gatson doing the music and choreo, I knew I had to be apart to have a chance to work with them as well."

Ephraim plays the the hunky, homeless hero Brad, discarded by his homophobic mom. His character falls in with the members of the House of Eminence, ruled by the stern aging diva Queef Latina, who keeps a careful, loving watch over her makeshift family of runaways and throwaways. When two of her crew fall for Brad, the Queef is royally unamused.

Ephraim began performing and training at age 11. As a teen, he formed the dance group Impact with his younger sister Martina Sykes and three friends. He is an original cast member of the Tony Award winning musical Memphis where he made his Broadway principle debut, he shared the stage with Cheryl Cole during X Factor UK and has performed in the presence of President Barack Obama and First Lady Michelle Obama.

Ephraim can be seen as Benny in the Off-Broadway production of Rent in New York, NY.