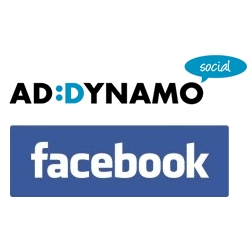 “Ad Dynamo has over 20,000 websites – offering more than 3,000 advertisers a great performance advertising solution globally. The introduction of Ad Dynamo Social extends our offering to enable advertisers to reinforce performance oriented ad campaigns with social ad campaigns, facilitating personal, engaging, and highly targeted dialogues with customers within a connected social world. I’m also happy that, as we build out our product offering, we are maintaining a common thread of relevance – speaking to customers in a meaningful manner as close to their point of purchase is our vision,” says Sean Riley, CEO of Ad Dynamo.

Facebook ads provide advertisers with the ability to engage a highly targeted audience in a socially connected world. The ads go beyond traditional "clicks" and "impressions" and can generate social activity within the Facebook ecosystem, interacting with stories and connections.

“Whilst we are excited about the potential of this opportunity on a global scale, we believe that South Africa in particular will benefit from Facebook’s location based targeting, which enables advertisers to target an audience in a specific city,” says Sean Riley. Given the prospect of dependable location targeting in SA, Ad Dynamo Social opens up possibilities for locally focused advertisers who have, until now, not been able to take full advantage of online advertising opportunities.

About Ad Dynamo
Ad Dynamo is a Cape Town based online & mobile advertising marketplace, powered by proprietary technology developed over a number of years. Ad Dynamo has successfully extended its global presence to Nigeria, the UK, Ireland, the Netherlands, and Spain. Ad Dynamo is funded by Remgro’s venture capital fund, Invenfin.