The Xclaimed Ministries' Third Annual Christmas Festival drew a crowd three times of what it was just two years ago.

Stanton, CA, December 15, 2011 --(PR.com)-- In Stanton on December 10, 2011, Xclaimed Ministries hosted their Third Annual Community Christmas Festival that drew over 1,080 visitors. The attendance has tripled since the first festival in 2009. Paul Karanick, Xclaimed Ministries’ President and Evangelist, attributes much of the increase to the current economy. Karanick said, "Our ministry is growing and we do expect each event to increase in number, but to see such a great increase must be a reflection of how many people are in need because of this economy.

"One of the most important parts of our ministry is accomplished through a generous gift from the Lockman Foundation - they provide all the free Bibles that we give to each person in attendance. This is such a priceless gift for us to see each person taking home the Word of God!"

The ministry has an average weekly attendance of 60 people each Saturday night. The people of this ministry all rally together to produce four to six community events each year. These events are similar to the Community Christmas Festival with an average attendance of 350 people.

At the festival last Saturday, over 540 children received two new toys each. Thanks to a donation from Adventure City theme park, 100 children received free admission to the park. Tommy’s Original Hamburgers donated 20 free combo meals and a local Carl’s Jr. donated 35 free kids’ meals. At every event, the most exciting part for the children is the drawing for free bicycles. Karanick said, “We give away approximately 4-10 new bicycles at each event during the year; but at Christmas we try to double that amount. At this event, we gave away 24 new bicycles. Since 2009, we have given away over 300 bicycles and thousands of toys.” The event began at 1:30pm with free food for everyone plus jumpers and other children’s activities. By 3:15pm, the Xclaimed Band took the stage and provided an uplifting concert. Children were overwhelmed with joy when each member of the band brought out toys and began to toss them into the audience. Paul Karanick provided a message of Hope and the “Reason for the Season,” Karanick said, “The gift from God is salvation through Jesus Christ.”

After the drawing for the 24 bicycles, the Xclaimed Team had everyone break into three lines matching the color of the child’s wristband. Once in line, the children were allowed to walk by the toys and choose two toys each. Joey LaRue, an Xclaimed Ministries volunteer, was in-charge of line control as the children would enter the toy area. LaRue said, “I can’t tell you how many people told me how thankful they were for what Xclaimed Ministries was doing and how impressed they were by the organization and efficiency of the event.”

Each year this event continues to grow not only in visitors, but also in volunteers. There were many volunteers from other churches: La Palma Christian Center, Chino Hills Calvary Chapel, Anaheim Calvary Chapel, Placentia Grace Community Church, Norman Moore Ministries, Crescent Avenue Family Ministries, Sea Coast Grace, Cerritos Crossroads Multinational Church, Long Beach First Church of the Nazarene and Palm Desert Church of Christ. Donations from individuals have also increased compared to the last two years. Karanick says, “Folks see that our heart’s purpose is to help the people of our community and deliver a message of Hope in Jesus Christ. Many have told me that the reason they have begun to donate is because they can see the results of their donations. When people ask me to describe what we do, I usually ask them to do a web search (i.e. Google, Bing, Yahoo) for ‘Xclaimed Ministries’ where they can read the news articles for themselves. The kind words that others write about us are much better than anything that I say!”

For additional information or to make a donation to Xclaimed Ministries outreach work, visit http://www.xclaimed.org or http://www.facebook.com/xclaimed. To speak to someone, call (714)803-9692. 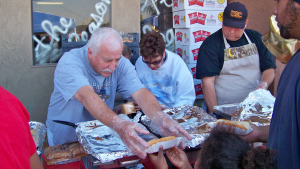 The band begins to play as people are getting their seats in the Sanctuary and two other overflow areas. 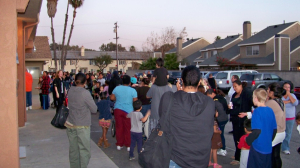 Xclaimed Ministries divided everyone into three lines for toy distribution. 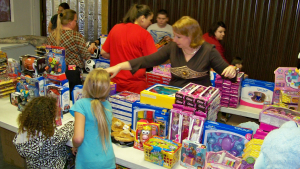 Children walk by the tables and choose two toys 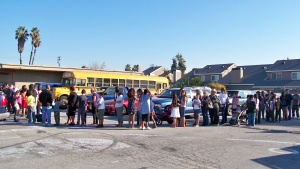 Line of people wrap around the building