Cabot Barden, Author of It's The Bass Player, Will be Holding a Book Signing at Barnes and Noble in Hendersonville, TN from 12 to 2 PM on Saturday, April 7, 2012 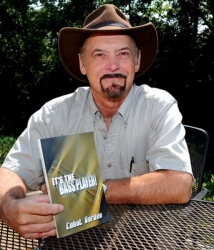 Talladega, AL, March 24, 2012 --(PR.com)-- Cabot Barden, author of It's The Bass Player and Mixed Blessings, will be holding a book signing at the Barnes and Noble book store on April 7, 2012 from 12 noon to 2 pm. Barden's first book, It's The Bass Player is being read as far away as South Africa, England, and Australia. His second book, which is being released April 3, will be on sale in most Barnes and Noble stores, Amazon.com and eKindle. Both books are based loosely on Barden's own experiences while playing in bands over the years. Barden is an accomplished musician, singer, and songwriter. He has played in bands all of his adult life.
Contact
Cabot Barden-Author
Cabot Barden
256-223-1478
http://www.facebook.com/pages/Its-The-Bass-Player/240783672608054
seabard@hotmail.com