An Exhibit of The History of Maine Labor Mural

Exhibit: The History of Maine Labor Mural - Shows the famous labor mural by artist Judy Taylor that was removed from the Maine Department of Labor by Governor Paul LePage. A vivid testimony to the debate on where art and politics meet. April 22 to May 6, 2012. Opening Reception: Sunday, April 22, 2:00 PM. Panel discussion with union officials, artists, and academics on Saturday, April 28, 1:30-2:45 PM. 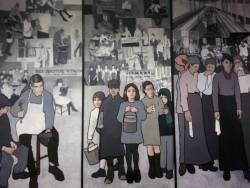 The exhibit of The History of Maine Labor Mural by Judy Taylor brings to Lawrence a set of images that now stands at the forefront of the discussion of 20th and 21st century public art and visual culture.

The eleven panels depict Maine's labor history, from crafts to textile and wood workers, from the first labor day to the '37 shoe strike, from labor reformers to the future of Maine labor.

In March 2011, the mural was removed from the lobby of the Maine Department of Labor at the order of Governor Paul LePage. A recent Federal court decision has sustained that action. Curator Nancy Nesvet, working with the artist, created this exhibit that includes a full-size reproduction of the mural.

In this showing, viewers are challenged to rethink the spaces where art, the public, and politics meet, and reflect on the meaning of work and production on the visual arts and American life.

The Lawrence History Center, in conjunction with the Bread and Roses Centennial, presents in a single exhibition the most exciting and controversial recent work of a mural artist.

Ms. Taylor’s mural has been featured on NPR, in The New York Times, The Washington Post, and in other national media outlets, sustaining a national discussion on art and public space and how visual culture helps to represent and remember American labor history.

The themes depicted in the mural and the exhibit text are closely related to the 1912 textile strike in Lawrence as well as later labor struggles. The History of Maine Labor Mural will be on display on the 6th floor of the Everett Mill, 15 Union Street, Lawrence, MA.

Hours: Tuesdays to Sundays, 11:00 AM to 3:00 PM.
Sunday, April 22, 2:00 PM Opening and Reception.
Saturday, April 28, 1:30 - 2:45 PM Panel Discussion: “Controversies in Public Art: The Maine Labor Mural and Beyond.” Join labor union officials and professionals in the arts, museums, and academia for a conversation about the themes of this exhibit. - For further information on the panel, contact Jurg Siegenthaler at 301-233-9653 or jsieg@american.edu.

The exhibit is sponsored by the Rosman Family Fund/ECCF; the Art, Labor, Education Institute; the Lawrence History Center; and the Bread & Roses Centennial Committee.