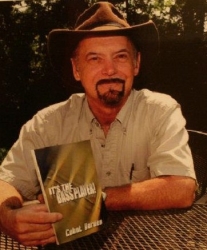 Sylacauga, AL, May 07, 2012 --(PR.com)-- Cabot Barden, author of It's The Bass Player and Mixed Blessings, helps create the Young Writers Short Story Competition in the southern half of his home, Talladega county. Along with the help of the local school libraries, the Sylacauga City Chamber Of Commerce, the editor of the Local Issue, the staff of the Comer Museum, and several other local authors, his team is preparing a 20 page short story writing competition for kids from the sixth grade to the twelfth. The winners will be announced this fall after School has started again. Barden spoke at the middle school earlier this year and realized that there are a lot of aspiring young writers who, he says, "Need a boost of encouragement from somebody who has had some success in the writing field." Barden, who is an accomplished songwriter who has had several songs on the radio over the years, as well as an author with 2 published books, wants to give these kids a chance to get their writings seen. "It took me over forty years to finally pen a complete book and actually do something with it. I'd like to see these kids get an earlier better start than I did," says Barden.
Contact
Cabot Barden
256-223-1478
http://www.facebook.com/pages/Its-The-Bass-Player/240783672608054
seabard@hotmail.com