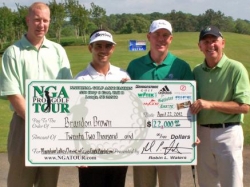 Myrtle Beach, SC, June 16, 2012 --(PR.com)-- If you don’t have dreams, then you have nothing to chase. It’s a simple mantra, but many fall short of fulfilling their imaginings due to a lack of talent or time. Brandon Brown is not one of those people.

After spending the last five years on the NGA Pro Golf Tour, Brown of Shelbyville, Ky., will get a chance at the “Big Time” by competing in the Reno-Tahoe Open at Montreux in early August. The event will be Brown’s first start on the PGA TOUR.

“It’s a dream come true,” said Brown, a six-time NGA TOUR winner. “It’s amazing what the NGA TOUR has done over the last few years for its players. All the guys on the Tour want to get to the next level, and I’m honored to be given the opportunity.”

Brown wasn’t “given” anything.

Thanks to a partnership between the NGA TOUR and the Reno-Tahoe Open, the Eastern Kentucky alumnus earned his position in the field by being the leading “member” on the NGA TOUR Pro Series money list at the season’s midpoint.

Brown’s inaugural start on the PGA TOUR couldn’t come at a better time, considering the two-time All-OVC Team selection has been playing remarkable golf over the last two years, racking up a Tour-high five wins.

“I’ve definitely been playing well over the last few years,” said Brown, who has 10 Nationwide Tour starts. “I’ve always felt like I had the ability to play on any tour, but I’ve made great strides in the mental side of the game and that’s helped my consistency. The last year and a half, I’ve just played golf and not gotten too far ahead of myself.”

Brown hopes the Zen-like focus will ease the butterflies when he tees it up against some of the best in the game.

“I’m going to treat it like any other event,” said Brown. “I’m super excited about being able to play in the Reno-Tahoe Open, but I can’t dwell on it because it would be easy to get overwhelmed. I’m not trying to treat the event any different and hopefully I can be in contention.”

The Reno-Tahoe Open is truly '"Big Time" as one of just 47 PGA TOUR events worldwide, and now the only event on the PGA TOUR calendar with a Modified Stableford scoring format. This year’s Reno-Tahoe Open takes place July 30-August 5, 2012 at the stunning Montrêux Golf & Country Club, a Jack Nicklaus Signature Design course and one of the longest on the PGA TOUR.