Dentists report paying their dental hygienists about $36 per hour, according to a Wealthy Dentist poll. Many dentists expressed resentment over the high price tag of a dental hygienist. Location is highly correlated with hourly base pay, with urban California hygienists being paid twice as much as their rural Southern counterparts. 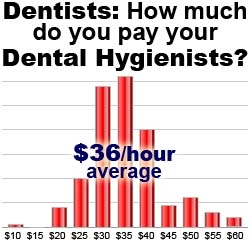 Tiburon, CA, July 16, 2007 --(PR.com)-- In this poll, they asked dentists the average base hourly pay for their dental hygienists. The average response was $36 an hour. However, the range is wide, with some dental hygiene practitioners making $20 or less and others pulling in $50 or more. Dentists' feelings on the subject are mixed; some feel hygienists are grossly overpaid, while others insist they're worth every penny.

Geographic location was highly correlated with hourly rates for dental hygienists. Given that urban areas have a higher cost of living, it is not particularly surprising to discover that urban hygienists make $4 an hour more than their rural counterparts.

In addition, how much a hygienists are paid has a lot to do with the state in which they work. California hygienists make the most of all, with an average base pay of $46 per hour. However, in rural and Southern states the average pay was well under $30. Observed one dentist, "In DC, the average is $350 per 8-hour day. Now I live in Utah and it's $250."

The most popular responses to this survey were from dentists who feel hygienists are overpaid. "They get paid too much for what little they do," complained a New York orthodontist; it's also worth noting that this specialist pays $27 an hour, well below the state average of $35. "I do not know what they are thinking. Do they think they are worth more than doctors? I am paying my hygienist too much... and it is the market rate here in Ventura County," commented a California dentist paying $50 per hour.

Some few dentists praised their hygienists."She's worth every penny," raved an Illinois dentist paying his hygienist $55 per hour. "She makes me a fortune."

However, more dentists voiced hostility towards hygienists and how much they get paid. In fact, one California dentist grew so frustrated with hygienists that he eliminated them from his practice. "In my first dental practice I had 7 hygienists working for me. I was not impressed with the return on investment; no matter how much incentive or positive reinforcement I provided, they did the bare minimum. So in my current practice I do all my own hygiene and will hire only associate dentists who will perform their own hygiene as well. My overhead and stress levels are much lower with this new arrangement."

The shortage of dental hygienists makes them more expensive - a fact that irks many dentists. "We need to open up enrollment at dental hygiene schools," suggested an Arizona dentist. "They could easily run a night program and double enrollment with no increased facility cost." A North Carolina dentist commented, "I think dental hygienists are overpaid in our region. There are so few of them that they can dictate their rate."

Dental hygienists are far from the only non-dentists employed by dental practices. "[Hygienists are] way overpaid for the amount of schooling required for a 2 or 4 year diploma," commented a Hawaii dentist paying $32 an hour. "Relatively, the assistants and front desk people are underpaid."

Not all hygienists are paid by the hour. Some work on commission, generally receiving around 30% of production. Though many dentists find this to be a cost-effective arrangement, others caution against it. "Hygienists should be paid based on their ability to produce. Commission gets too hairy, so base pay is best," declared an Alabama dentist paying $20 an hour - among the lowest wages reported in this survey.

It is important to note that a hygienist's hourly rate does not include benefits - a fact many dentists are quick to point out. Many dentist employers offer health insurance, holiday time, bonuses and pension plans. Some even went so far as to include "birthday lunches" and "gifts" as job benefits.

"Oh, the drama between dentists and dental hygienists," said Jim Du Molin, founder of both The Wealthy Dentist and the Internet Dental Alliance. "They need each other, they work closely together - of course they're going to bicker and complain about each other. You know, like an old married couple that's been together too long already but is never going to get divorced."

For additional information on this and other Wealthy Dentist surveys, as well as more dentist comments, visit www.thewealthydentist.com/survey.

The Wealthy Dentist is a dental practice marketing and dental management resource featuring dental consultant Jim Du Molin. The site’s weekly surveys and dental newsletters are viewed by thousands of dentists across the United States and Canada. The Wealthy Dentist is a sister company of the Internet Dental Alliance, Inc. (www.internetdentalalliance.com). IDA is the largest provider of websites for dentists, email patient newsletters and dental directories in North America.