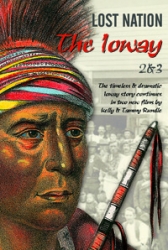 Richland Center, WI, April 08, 2013 --(PR.com)-- Kelly and Tammy Rundle of Fourth Wall Films, producers of the Emmy® nominated documentary "Country School: One Room-One Nation" and the award-winning "Lost Nation: The Ioway 1" will present their critically-acclaimed documentaries "Lost Nation: The Ioway 2 & 3" at Richland Center City Auditorium on Saturday, April 13, 2013 at 2:00 p.m. The special Wisconsin Humanities Council event is free to the public and co-sponsored by the Richland County Performing Arts Council and the Richland County Historical Society. Dr. William Green Mark, anthropologist/Director of Beloit College's Logan Museum, and Mark Cupp, President of Cultural Landscape Legacies, provided on-camera interviews for the film and will join the filmmakers for Q&A after the screenings.

Parts 2 & 3 of the three-part film series begins where "Ioway 1" left off, in 1837 when the Ioway were forcibly removed from their ancestral homeland of Iowa in to a reservation on the border of Nebraska and Northeast Kansas. New Ioway leader White Cloud (The Younger) believed his people must relocate to survive. But intermarriage, broken treaties and the end of communal living led to a split in 1878 and the establishment of a second Ioway tribe in Oklahoma. Both tribes endured hardship and challenges to their traditions and culture to achieve successful land claims and self-determination in the1970s. "Lost Nation: The Ioway 2 & 3" brings the dramatic Ioway story full circle.

"I believe all the tribes had their trail of tears," said Iowa Tribe of Oklahoma Tribal Elder Joyce Big Soldier-Miller. “They all suffered--all those Indians who made those treks away from their former homelands.”

“It’s always good to look at the past and remember that it does affect the future,” said Iowa Tribe of Kansas and Nebraska tribal member Reuben Ironhorse-Kent. “The ancestors did the best they could with what they had.”

Ioway Elders and tribal members join other Native scholars, historians, archaeologists and anthropologists to tell the dramatic and true story of the small tribe that once claimed the territory between the Missouri and Mississippi Rivers from Pipestone, Minnesota to St. Louis. The Ioway tribe’s early history has ties to various locations throughout Wisconsin. The state of Iowa takes its name from the Ioway tribe.

“You are bound to be moved by these beautiful films. The Rundles expertly capture the oral history, the people you won’t soon forget and their past that must not be forgotten,” said Quad City Times Film Critic Linda Cook who gave the documentaries 4-out-of-4 stars.

The Wisconsin Humanities Council event will feature the two 50-minute documentaries "Lost Nation: The Ioway 2 & 3" followed by Q&A with the filmmakers and Mark Cupp, President of Cultural Landscape Legacies. The program is free to the public and begins at 2:00 p.m. on Saturday, April 13, 2013 at Richland Center City Auditorium, 182 North Central Avenue, Richland Center, Wisconsin. The event is co-sponsored by the Richland County Performing Arts Council and the Richland County Historical Society. The films contain mature themes and historical images that may be disturbing to young children.

"Ioway 2 & 3" will continue screening throughout the U.S. and the two films will be released on a single full-featured DVD in May 2013. An alternative soundtrack in the nearly extinct Ioway language will be offered on the DVD. Broadcasts on Midwestern PBS stations are slated for the fall of 2013. For more information about the "Lost Nation: The Ioway 2 & 3" visit www.IowayMovie.com.

The "Lost Nation: The Ioway 2 & 3" films and the public program were funded in part by a grant from the Wisconsin Humanities Council (WHC), with funds from the National Endowment for the Humanities (NEH) and the State of Wisconsin. Any views, findings, recommendations or conclusions expressed in these films or program do not necessarily represent those of the WHC or NEH.

The Wisconsin Humanities Council supports and creates programs that use history, culture, and discussion to strengthen community life for everyone in Wisconsin.

The mission of Cultural Landscape Legacies, Inc is to provide education, protection and preservation of the cultural heritage of the indigenous people who left their legacy on the landscape of the Upper Midwest.
Contact
Fourth Wall Films
Kelly Rundle, Producer-Director
309-797-0544
www.FourthWallFilms.com