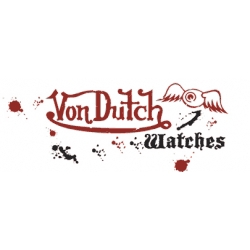 Los Angeles, CA, August 22, 2007 --(PR.com)-- The Giantto Group, a prominent Los Angeles-based jewelry company specializing in original jewelry and exclusive timepieces, announced today that their exclusive Von Dutch Watches Collection is now available in two premiere US Retailers; in New York City, at the Tourneau TimeMachine, in Las Vegas, at Tourneau at the Forum Shops inside the Caesar’s Palace Hotel and Casino, and in Los Angeles at Bettina Duncan at Fred Segal, Santa Monica.

To celebrate, the company held a party this last week at Bettina Duncan at Fred Segal Santa Monica location, hosted by television star, International model and the new face of Von Dutch Watches, Adrianne Curry. Spotted at the event were several celebrities including Brady Bunch star and husband of Ms. Curry, Christopher Knight, Survivor: Palau alum Jennifer Lyon and others.

The New York event will take place at Tourneau TimeMachine tomorrow, August 23rd, 2007 from 5:30PM – 7:30PM. Hosted once again by Adrianne Curry, the red carpet will feature the who’s who of the New York’s elite and celebrities.

In this exciting time, the company also announces that Von Dutch Watches Collection will feature a special edition commemorative Jimi Hendrix watch, endorsed by the Hendrix Foundation and the Hendrix Family, the design of which will embody some of the spirit of the late rock legend.

Based in Los Angeles, The Giantto Group is one of the leading jewelry companies and watch designers in the U.S. and the World. Their timepieces and jewelry are worn by the Who’s Who of the entertainment world including such names as Paul McCartney, Paris and Nicky Hilton, Cuba Gooding Jr., Jaime Pressly, Eva Langoria, Felicity Huffman, Jamie Foxx and numerous others.

“We are very exited that our Von Dutch Watches collection is now available at such great retail locations as Tourneau and Fred Segal,” said Anto G, company president. “We feel that these relationships provide a perfect fit for a line of watches that is elite, unique and fun all at the same time.”