KM Fine Arts Los Angeles is pleased to present Compulsive Pencil, a solo exhibition of prominent Colombian artist Federico Uribe. The exhibition will open with an artist reception on the evening of September 12, 2013 presenting 14 of Federico Uribe’s latest works built entirely out of color pencils. 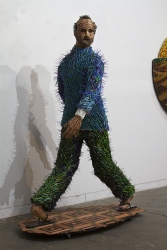 This facet of Uribe’s art form, Pencilism, is an embroidery-like technique with a repetitive and compulsive process creating a series of "paintings" and "sculptures" which re-envisions how the world around us is perceived. Uribe introduces irony, humor, childhood memories and fantasy in his work, with a fresh association of materials and ideas. He transforms the objects of daily life into new objects that have different significance, appearance and texture.

Uribe’s work explores the shifts in scale, materials, and techniques informed by the assemblage process that has been central to his working method. Although dating back to the 19th century, today’s era of heightened environmental awareness has inspired many new artists to recycling methods within the art form. Assemblage as an art form has been around for many centuries and in many forms all over the world. However, in Western culture, once dominated by painting and stone or bronze sculpture, the introduction of assemblage was a radical shift. It is difficult now, with this new medium having come fully into its own, for us to imagine what a leap it must have been in 1912 to consider disrupting the purity of the dominate mediums by the inclusion of foreign elements. At the time, in the midst of intense shifts in perception about the world and about the cultural status quo, disruption and disorientation were becoming normal states of mind from which to work. The perception of the world was becoming less solid and more open to endless possibilities while the supremacy of painting was being brought into question by the growth of photography. This is evidenced quite well in the Analytic Cubist experiments of Pablo Picasso and Georges Braque, giving rise to both collage and assemblage. The spread of assemblage as a new medium deserving of attention by serious artists goes far beyond the mere fact of Picasso and Braque having introduced them. These new ways of working would have remained only an anomaly were it not for a number of other important and simultaneous technological, cultural and political factors. American artists Alexander Calder, John Chamberlain, Joesph Cornell and Robert Rauschenberg have been extremely influential to assemblage artists.

Born in Bogota, Colombia 1962, Uribe lives and works in Miami. He studied art at the University of Los Andes in Bogota and in 1988 left for New York to study a Master of Fine Arts degree under the supervision of Luis Camnitzer. It was the beginning of a journey that included years of studies and work in Cuba, Mexico, Russia, England and finally Miami.

Initially his formation began as a painter with sensual and brooding canvases influenced by his dark reflections on the Catholic sense of pain, guilt and sexuality. In 1996, he abandoned painting and started collecting items from everyday objects in which he perceived more than just their utilitarian value, but also the aesthetic decisions that went into their creation. Uribe began to observe them with care, collect them, set them side by side and combine them, so that they became unusual instruments of a new aesthetic, full of color, irony and lively playfulness. He bought baby bottle nipples in various colors, rubber gloves, dolls, paper forks and chairs. Following the classic canons of figurative and abstract art, Uribe transformed them into sculptural installations - sometimes turning an object upside down - thereby altering its original meaning and function. Tools morphed into palm trees; screws, coins, rubber lips and computer keys became women’s torsos; Puma shoes became animals, and thousands of discarded books became whole room museum installations. When observed closely, his works reveal various kinds of interpretations; they invite us to touch them, to discover the detail and connection between one element and another. When viewed from further away, they offer volumes, forms, textures and color. Distance, proximity and perception are key factors in the interaction between Uribe’s work and its viewers.