Now Available in Paperback and Kindle "Attrition: The First Act of Penance" by SG Night

Enter a world of Demons, assassins, and magic this new Epic Fantasy, the debut novel of the young, up-and-coming SG Night—a story of sword and sorcery, tyranny and rebellion, love, and the fight for survival. A native of Northern Virginia, Night finished the draft of "Attrition" at just 17 years old and published the final product a few short months later at the age of 18. 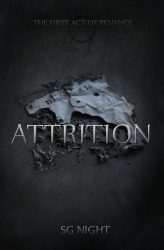 Ashburn, VA, September 10, 2013 --(PR.com)-- In "Attrition," Night brings the reader straight into the original and breathtaking nation of Io, a country held captive of the mighty Demonic Dominion. The Humans are in chains. The Elves were long ago exiled, and since have faded into myth. And the Majiski—Io’s race of battle-mages—have been all but eradicated by the Demons and their ilk.

The Genshwin are all that’s left of the Majiski, just three hundred or so survivors living in secret. From the shadows, they work against the Dominion. But how can they fight a war against such a terrible foe when their Patriarch is keeping more secrets than the Demons themselves?

After drawing us into Io’s intricate underworld of assassins, thieves, spies, and mercenaries, Night brings to life an unforgettable cast of rich characters, including Racath Thanjel, the Genshwins’ finest assassin. He is strong, fast, and brilliant...and constantly locking horns with his master. And now, as our story begins, Racath is swept up into a tangle of conspiracies, secrets, and ancient prophecies. Soon, he must choose his destiny: become the Savior of Io, or allow it die in the darkness of the Dominion’s iron fist.

Get your copy of "Attrition: the First Act of Penance" today! Available on Amazon.com in paperback and for eBook.
Contact
SG Night, LLC
SG Night
703-283-6911
www.facebook.com/sgnight