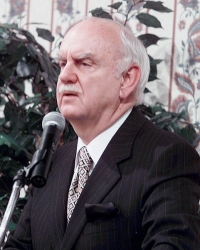 Oxford, OH, January 08, 2014 --(PR.com)-- Gilbert Gordon, Ph.D., Inorganic Chemistry of Oxford, Ohio has been named Biography of the Year in the Strathmore’s Who’s Who Worldwide Edition for his outstanding contributions and achievements in the fields of education and chemistry.

About Gilbert Gordon, Ph.D., Inorganic Chemistry
Dr. Gordon has had a spectacular career as a renowned chemist. He is Professor Emeritus at Miami University in Oxford, Ohio. He specializes in drinking water research, dynamics of chemical reactions (chemical kinetics), reactions of chlorine dioxide, chlorine and ozone (disinfectants and oxidizing agents) and all aspects of analytical chemistry. Dr. Gordon has received numerous honors and awards during his career including Chemist of the Year, 1981, and Distinguished Scientist, 1982, both from the American Chemical Society and he received the Miami University Distinguished Scholar Award, 2002. He is a member of many organizations and societies in the science and chemistry fields. Dr. Gordon received a B.S. in Chemistry from Bradley University in 1955, a Ph.D. in Inorganic Chemistry and Mathematics from Michigan State University in 1959 and did Postdoctoral studies at the University of Chicago in 1960. He has served as a Professor since 1967 with many prestigious universities. He is the Founding Partner of Gordon & Rosenblatt, LLC. His numerous accomplishments include chlorine dioxide research which is used extensively by the water treatment industry throughout the world to provide higher quality drinking water when using chlorine dioxide and he is a specialized expert. Dr. Gordon is married to Joyce and they have two children. In his spare time he enjoys wine tasting, evaluation and collecting.