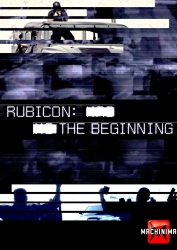 Los Angeles, CA, March 14, 2014 --(PR.com)-- Writer-producer-director Christian Johnston launches his first web series today: “Rubicon: The Beginning.” The production boasts the participation of actual Seal Team Six members and special forces who use the Virtual Reality Headset Oculus Rift to battle a Mexican Cartel. The pilot episode is the prequel to Mark Long’s graphic novel Rubicon and is the first installment of a multi-episode web series funded and distributed by Machinima, Co-produced by DJ2 Entertainment, the episode was filmed on location in the Nevada desert, Long Beach and Los Angeles. Inspired by actual events, the story tracks Navy Seal Teams working joint command with the CIA and FBI. Their goal is to shut down a Mexico Cartel working in cohoots with the Yakuza, the Japanese organized crime syndicate. The joint "Op" turns into full-scale firefights and high speed chases with 15 casualties.

“Authenticity is one of the most important things to me,” said Christian Johnston, the director of “Rubicon: the Beginning. Johnston’s goal was to create a digital series that does not rely on the typical junkyard locations most digital series limit themselves to. “We closed down sections of airports, roads and the Nevada desert to bring some bang to the shoot,” Johnston said. Because technology is a critical part of our nation's finest operators, Johnston integrated the Oculus Rift, Microsoft Surface Tablet, drones, and a few other tech gadgets both on camera and in the making of to create a cutting-edge counter-intelligence environment. To ensure accuracy, he worked closely with co-writer of the graphic novel Dan Capel, a founding member of Seal Team Six.

To watch the pilot episode of “Rubicon: The Beginning” visit: Machinima Prime on YouTube or http://www.youtube.com/watch?v=YFm0BslvcI4

About Complex Films
Established in 2001, Complex Films is a production company founded by Christian Johnston. Producing movies, commercials, documentaries and seamless product integration content, Complex Films has 25 projects under its belt. Johnston is best known for shooting in conflict zones. His credits include "September Tapes,” the 2004 Sundance hit shot in Afghanistan, and the fourth-coming "Blackline: The Beirut Contract,” shot on location in Lebanon.
Contact
Complex Films
Jeremy Ward
773-294-8683
www.complexfilms.com