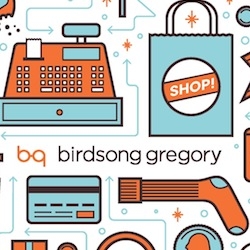 Charlotte, NC, March 19, 2014 --(PR.com)-- birdsong gregory, a retail branding and shopper marketing agency, based in Charlotte, NC was recently awarded a Gold ADDY Award for creative excellence at the district level – competing against other agencies throughout Virginia, North Carolina, and South Carolina. To view this winning entry, please click here.

The ADDY Awards (also known as the American Advertising Awards) are the largest creative competition in the world with over 40,000 local entries competing in 200 markets coast to coast. Winning an ADDY at the district level is the second step in competing for a National ADDY Award. Any entry that wins a Gold ADDY at the district level is automatically eligible to advance and compete in the national competition.

Selection of the most creative entry in each category is affected by a scoring process in which a panel of judges evaluates all creative dimensions of every entry. A Gold ADDY is recognition of the highest level of creative excellence and is judged to be superior to all other entries in the category.

The national competition gets underway May 31, 2014 at the annual conference of the American Advertising Federation in Boca Raton, Florida.
Contact
birdsong gregory
Philip Atchison
704-332-2299
www.birdsonggregory.com