A "Thank You" from Reviva Labs to Personnel for U.S. Service 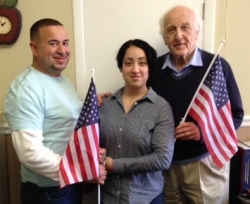 Haddonfield, NJ, April 30, 2014 --(PR.com)-- A “Thank You” for her service to our Country is received by Stefani Cruz (center), a second generation staffer at Reviva Labs, Haddonfield, N.J., manufacturers of all-natural skin care products. Cruz is starting a leave of absence from Reviva having been called up by her U.S. Army Reserve Unit for service in the Middle East. Prior to leaving, she will be taking courses studying the Arabic language. Also pictured is her father, Martin Cruz, (left) a 20 year employee at Reviva Labs. Right is Stephen Strassler, founder and President of the firm. Reviva Labs in the past has been honored by the U.S. Congress for its contributions to troops in Iraq of Reviva’s Vitamin E Stick, used to prevent sunburn, while under hot sun. Cruz’s father participated in the production of thousands of those items. (www.RevivaLabs.com)
Contact
American News Services
Joe Ball/Elena Cruz
484-562-0060