A World War II Veteran, a Watch, and a Wish 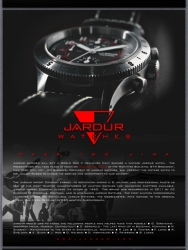 Mr. Shermer and Mr. Russo became acquainted on April 12, 2014 when Russo phoned Shermer regarding a Jardur watch he wore throughout his service in WWII. During the conversation, Mr. Russo explained that he purchased a Jardur tool watch during the war at a U.S. Navy Ship Store. He stated, “I loved my watch. It served me well over Iwo Jima. I just wish I still had it.” Russo then explained that someone took it from a bathroom wash basin sometime after the war. During the conversation, Shermer noted that Russo was still very upset over the loss of the watch. “When he spoke about his Jardur, he sounded like a person reflecting on an old friend,” said Shermer. Russo expressed that he would love to find and wear another Jardur watch again.

Russo’s sentiment sent Shermer into action. He reached out to his network of watch collectors and found a vintage Jardur the same model as Mr. Russo’s lost watch. “I think it will be awesome to present Julian with a vintage Jardur tool watch like the one he wore over Mt. Suribachi. Hopefully, this gift to Julian will be the ultimate ‘Thank you for your service!’”

The Jardur Import Company earned its reputation among U.S. military and professional pilots as one of the most trusted manufacturers of aviation watches and navigation plotters available. Jardur Import Company closed its doors in 1960. The brand was resurrected in 2011 by CC Shermer of Missoula, Montana, and is now named Jardur Watches. The first aviation chronograph launched under the revitalized Jardur Watches, the Degreemeter, pays homage to the original World War II era Bezelmeter 960 aviation chronograph.