Full feature film “GEHENNA” is a horror/suspense thriller feature independent film directed and produced by KA ZARR Coleman in association with KA ZARR Productions. The hope is that “GEHENNA” film will make an impact, entertain and inspire all who watch. 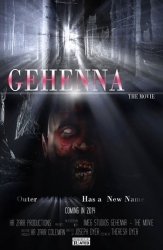 Brandywine, MD, September 07, 2014 --(PR.com)-- This unique horror/suspense thriller feature film GEHENNA opens with an intense scene where a large man is running through the dark woods while screaming frantically for his life. As he approaches a seemingly abandoned old storage garage. Out of the middle of the fog and darkness an unseen large killer (Antagonist) ascends from beneath the dark woods. Within a minute he overpowers the large man who is desperately trying to escape being pulled into the outer darkness. Three days short days later a group of would be hikers accidentally stumble upon several badly mangled bloody body parts and quickly report it to the police. Over the next two weeks ten murders and unexpected natural deaths are discovered, all killings appear to be committed with what seems to be a machete of some kind, and still nobody, including the police, has a clue as to how and why the killings are occurring, at first look they seem to be random until police investigators begin noticing a pattern within the bloody gruesome scenes that appear to be clues. Seasoned police detective Roger Cook (Protagonist) is a burnt-out burly looking investigator who is earnestly looking to retire from the force in 10 days. He is an expert and thrill seeker for ritualistic and religious based homicides.

Pre-production is slated to begin in early January 2015. By successfully raising funds it will to help with the cast and crew travel expenses, cast and film crew cost for their services, craft food service costs, locations and booking fees, post-production cost such as camera equipment rentals, lighting, vehicle rentals and Festival registrations, marketing, movie release and distribution cost.