KagelDesigns.com Offers Sophisticated T-Shirts and Mugs for All Your Christmas Presents 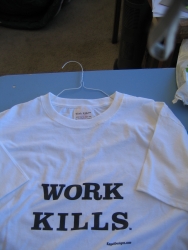 New York, NY, December 01, 2014 --(PR.com)-- “Each shirt and companion mug is a subtle understatement, just a few words which convey that the wearer is cultured, knowledgeable, or disillusioned,” said Peter Kagel, owner and author of http://www.KagelDesigns.com/

“I trademarked WORK KILLS™ after I got compliment after compliment from people who feel trapped in their dead end jobs. ‘IT’S ALWAYS A PLEASURE TO MENTOR YOU’ gives wearers a subtle leg up on their buddies. Or there’s a straight ‘MENTOR’ for the wise old owl.”

"For men who want to make a joke out of their animal urges we have ‘ANOTHER BLAMELESS TESTOSTERONE VICTIM’ which is actually a unisex shirt.

"For left handers we offer ‘LEFTIES RULE’ and for the tennis players ‘A TENNIS PLAYER’S BRAIN’ and a ‘FOOT FAULTING is for COWARDS and CHEATERS shirt.

"There’s a ‘SHE WHO MUST BE OBEYED’ and a ‘HOUSEWIFE’S BRAIN’ shirt and mug. Along the domestic line there’s are ‘THERE’S NO SUCH THING AS A FUNCTIONAL FAMILY’ and a ‘MARRIAGE IS AN UNNATURAL SEX ACT’ shirts.

Kagel concluded, “You can get your Christmas shopping done in one fell swoop and have a blast doing it because you know the person you give one of these shirts, sweatshirts or mugs to will fondly be thinking of you.”