A new book authored by one of Arpaio's top chiefs. The author gives a tell all candid insight into the life of this controversial sheriff. A must read for all that are interested in the current politics of this man. 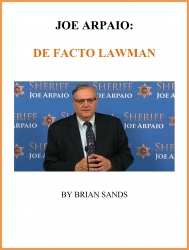 Los Angeles, CA, December 04, 2014 --(PR.com)-- E Travel L.L.C. is pleased to announce the release of an account of the last twenty-two years of the Arpaio Administration. This book was written by one of his top commanders retired Chief Brian Sands. This story gives the internal workings of the Arpaio as he developed his persona as the “toughest sheriff” in America. This portrayal of Arpaio’s motivations and often time’s perceived self indulgences is discussed in very candid terms.

All topics of the failures and successes of the sheriff’s office are told very boldly. Sands says, “Some people will read this and walk away still ardent supporters of Arpaio and some will be confirmed of their negative feelings of his tenure as sheriff of Maricopa County, Arizona.” Sands has the insight of working closely with Arpaio in the last two thirds of his almost thirty year career with the Maricopa County Sheriff’s Office.

Sands covers some of the most controversial aspects of Arpaio and his leading of the Sheriff’s Office. This includes such topics as the infamous birth certificate investigation, as Arpaio gives the nation the appearance of taking on the president of the United States. This book reveals the motivation of Arpaio’s real intent as he succeeded in a media conquest of the media itself.

Readers will learn exactly what occurred with the so called, “sex crimes unit” failures.

Other areas of interests are behind the scene accounts of Arpaio and his top staff dealing with Actors and politicians in order to develop media attention. This book is published in print and ebook formats. More information can be found on Arpaiodefactolawman.com.