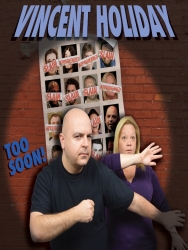 Cincinnati, OH, January 07, 2015 --(PR.com)-- After six years of honing his craft at comedy clubs, comic book conventions and venues too bizarre to list, Ohio stand-up comedian Vincent Holiday will release his debut album, “Too Soon,” on iTunes and Amazon on Monday, January 19th. Holiday’s playful, socially conscious humor will be on display at Wiley’s Comedy Joint in Dayton, OH on Wednesday, January 14th, where he will headline his album’s pre-release party.

Vincent Holiday’s unique style of comedy is all about defying expectations. An openly gay self-described geek, Holiday has built a cult following through his work with various improv groups as well as his stand-up performances at the Laughing Skull Festival in Atlanta, GA and Gilda’s LaughFest in Grand Rapids, MI. Holiday is also a well-regarded actor, having turned in praiseworthy performances in local films like Scarewaves, A Bulldog for Christmas, and Depression: The Movie. He’s a sharp writer who enjoys tipping over sacred cows without talking down to audiences or sacrificing laughs. Vincent delivers killer sets at comedy clubs and comic book conventions, using his improvisational skills to create memorable characters that are relatable to everyone.

“Too Soon” will be released by On Tour Records, an independent label founded in 2010 by comedian Ross Duncliffe. On Tour Records has released several noteworthy comedy albums over the least few years, including “They’re Still In the Can” by Bob & Tom Show favorite Jeff Bodart and the highly acclaimed “I Don’t Think I Believe In Us” by Holiday’s mentor, Stewart Huff.