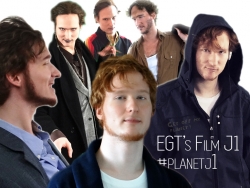 Brice, OH, February 14, 2015 --(PR.com)-- Justin Kazmierczak portrays multiple characters in a comedy adventure being produced this year with a top-notch makeup artist and special effects to create a film using less resources than the entertainment industry.

The teaser trailer is designed to prove that a feature film with a budget of just $58k is feasible. Justin Kazmierczak is seeking funding for the film through Kickstarter.

Justin is personally available for you through his cell: +1 (614) 378-9801 or instantly via email: justin.kaz@4egtv.net - The movie's dedicated site is PlanetJ1.com/ and the Kickstarter project at http://go.4egtv.net/ksj1

The teaser trailer was built with paid staff, creative use of photography equipment, and a whole lot of hard work. The teaser was filmed over 24 hours, edited under 100 hours, and mastered with consumer feedback in mind.

EGT is an entertainment company that encourages people to attain their dreams whatever the cost. So "Go ahead, Change the word!"
Contact
EGT
Justin Kazmierczak
716-759-4348
4egtv.net