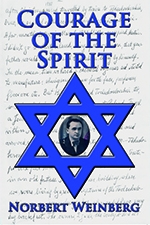 Hollywood, CA, April 28, 2015 --(PR.com)-- Rabbi William Weinberg, the subject of the book Courage of the Spirit, finally gained his freedom in Vienna with the surrender of Nazi Germany to the Allies on May 9, 1945. To commemorate the 70th anniversary of this event, IndieGo Publishing is offering Norbert Weinberg's book at greatly reduced promotional prices from April 26 through May 10, 2015.

You can purchase the paperback for only $7.50, half the original price, using discount code 7J6LFAYJ at its CreateSpace ebookstore:
www.createspace.com/4773507

The ebook will be available for 99 cents from Nook, Kobo, Google Play, and Apple's iBookstore, and for $1.99 from Kindle.

Courage of the Spirit portrays the spiritual struggle of the author's father, Rabbi Dr. William Weinberg, who survived Nazi and communist tyranny to become the first State Rabbi of the community of Holocaust survivors in the German State of Hesse. Rabbi Weinberg's journey spanned thousands of physical miles by freight train and on foot, from cosmopolitan Vienna and Berlin to Stalingrad and central Asia as he and his brother Benjamin kept a step ahead of the Nazi armies. The book spans the mental and emotional journey from the medieval shtetl and the great empires to the weak democracies and totalitarian regimes that followed, and finally, to freedom. Courage of the Spirit reconstructs these events from conversations with the author's father and his uncle, from family notes, and from historical documentation.
Contact
Norbert Weinberg
818-935-6053
http://www.courageofspirit.com/
You may also contact IndieGo Publishing at indiego.ebooks@gmail.com