"The Cancer Olympics," a book by Robin McGee, is an International Book Award 2015 Finalist. McGee is also the recent recipient of the Canadian Cancer Society's highest honor, the National Medal of Courage. 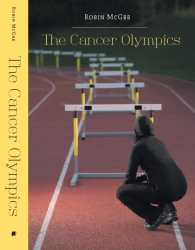 Halifax, Canada, June 08, 2015 --(PR.com)-- "The Cancer Olympics," a suspenseful and heart-wrenching true story of Nova Scotian author Robin McGee's fight to live, is an International Book Award 2015 Finalist. McGee was diagnosed with late-stage cancer after years of bungled medical attention. Her book a suspenseful account of her fight for survival, her advocacy for fair drug policy, and her valiant search for justice.

USA Book News announced the winners and finalists of THE 2015 INTERNATIONAL BOOK AWARDS (IBA) in Los Angeles on May 21, 2015. Both mainstream and independent publishers competed. Jeffrey Keen, President and CEO of USA Book News, said this year’s contest yielded over 1200 entries from 15 countries, representing “a phenomenal mix of books from a wide array of publishers throughout the world.” McGee’s book placed in the Health – Cancer category.

The winning of an IBA finalist position is just the latest in a string of accolades for McGee's work. In April, she was awarded the Canadian Cancer Society’s highest honor, the National Medal of Courage. “It is a gold medal,” said McGee, “so fitting for 'The Cancer Olympics.'”