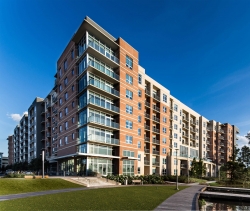 Houston, TX, June 25, 2015 --(PR.com)-- After an intense and compressed construction schedule, Hoar Construction is pleased to announce the substantial completion of One Lakes Edge, an 8-story midrise upscale multifamily building within the 66-acre Hughes Landing® development in The Woodlands, TX. One Lakes Edge began construction in October 2013, topped out in July 2014, and the first tenants began move in April, 2015. The Woodlands® Development Company, a wholly-owned subsidiary of The Howard Hughes Corporation®, is the owner and developer.

The 850,000 SF project completed according to an impressive 18-month schedule. To meet the schedule demands of this project, the construction team focused on efficient production and timely, effective communication of information. Hoar used a visual approach for project planning, with a combination of 3-D schedule animations, annotated and color coded 2-D drawings, and drone-created imagery to document construction progress. Technology factored heavily into the duration of construction. Hoar used the PlanGrid app as the centralized location for project documentation. Several key subcontractors used an iPad on site to access and upload real-time plans and notes. With a fully integrated building information model (BIM), the team was able to catch construction clashes early and avoid changes on site. Production based scheduling was also a key factor in ensuring the delivery of the project on time. By using factual production rates for each scope of work, the team was able to plan the schedule to a level of detail that ensured on time delivery.
Brandon Dexter, project superintendent for Hoar Construction, oversaw the team communications.

“The 3D model was incredibly beneficial, especially under the schedule crunch. Due to concerns with foundation, we worked with the rest of the design to make sure the BIM was comprehensive, and thank goodness for that. Initially the storm and sanitary lines were running through the ground level of the parking garage. We caught that early and saved considerable time and money. That’s just one example of many. Not one time did we have to cut concrete on the project because of a marked up shop drawing that didn’t get caught,” Dexter said.

One Lakes Edge has a prime location on Lake Woodlands and offers 390 residential units with retail space on the first floor. The residential units are situated around an 8-story parking structure with over 700 parking spaces. The building super-structure is post-tensioned, cast-in-place concrete with metal stud walls. In addition to close proximity to retail, restaurants, Whole Foods Market and office space, amenities within One Lakes Edge include a fitness center, bike storage, and a landscaped exterior plaza deck. The outdoor deck includes a swimming pool with an adjacent outdoor kitchen and covered cabana. Ziegler Cooper Architects served as the designer for the project.

“The owner set the bar high for this project, both in terms of the schedule and the expected level of finish quality. The technology was certainly a huge benefit for delivery, but the real difference was the way the team came together. The owner supported us every step of the way, and all the team members stepped up, even when we asked them to do things a little differently with the iPads and model integration. I know this will be a great addition to The Woodlands and I’m really proud we were able to be part of it,” said Jeff Light, Project Executive for Hoar Construction.

“The Hoar Construction team at One Lakes Edge has been able to push the envelope and find innovative technologies to enhance the project, but still meet the budget and the critical timelines we have, and that’s the partner that we want. We are very happy with how Hoar has approached this project,” said Jim Carman, Director of Building Development for The Howard Hughes Corporation.