Most general dentists fully support dental boards, but one in three dentists expresses frustration at the restrictions many state dental boards impose on dental marketing. Though intended to protect consumers, some dentists consider the rules a restraint of trade. 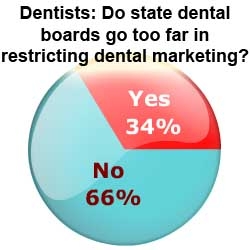 The American Dental Association offers its members guidelines on marketing and advertising ethics. "Statements shall be avoided which would... contain a material, objective representation, whether express or implied, that the advertised services are superior in quality to those of other dentists, if that representation is not subject to reasonable substantiation," reads the organization's official Code of Conduct. "Subjective statements about the quality of dental services can also raise ethical concerns."

The primary purpose of dental boards is to protect the public's best interest. "Most do a great job," said a Louisiana oral surgeon. "It would be chaos without some standards as one dentist tries to 'one up' another," commented one periodontist. "Concentrate on excellent dentistry and not an unethical ad war," advised a North Dakota dentist.

In today's consumer society, a dental practice that doesn't market itself will most likely fail. "Dental boards are restricted from prohibiting advertising because it would be considered restraint of trade," commented one prosthodontist. However, that is not to say the dental boards don't try. Complained one general dentist, "Our board is mostly made up of small minds from small towns who would like to return to the 19th century."

Many dentists would prefer to see boards take an even stronger stance against marketing claims. "They don't do enough to restrict false and misleading advertising," declared a one dentist. "Advertising is important to make the public aware of who and where you are," acknowledged a New Jersey orthodontist, "but the marketing mode used by consumer products is to convince the consumer of a product's superiority. On the other hand, a professional endeavor must not purport the superiority of the individual dentist, but only of the benefit of the service to society. Without regulation, dental advertising will quickly degenerate into consumer advertising and not professional advertising."

Some specialists turn to dental boards when they feel general dentists are stepping on their toes. "Too many 'specialist wannabes' out there," complained one general dentist. "I believe that the state boards do too little," said a prosthodontist. "In our locale, for example, there are numerous GPs listing themselves under 'Prosthodontists' in the Yellow Pages." Agreed a Missouri oral surgeon, "General practitioners should stop pretending to be specialists."

One general dentist shared his horror story. "I have been personally sanctioned by the State Dental Board and fined $5,000 for an 'advertising incident' where I did nothing wrong. I was convicted by the Board who took a drug-seeking patient's word over mine, and refused to let my staff corroborate my testimony. I will never, ever again go before a dental board without legal representation."

Others were also concerned about the power wielded by boards. "Unfortunately the dental boards are created in such a manner that empowers them to be judge, jury and executioner," commented a general dentist. "The laws they mandate and enforce cause me to believe the 'due process' part of our constitution was forgotten in their creation."

"When it comes to marketing, the entire profession of dentistry is having an identity crisis," said Jim Du Molin, dental consultant and founder of The Wealthy Dentist. "Many feel that marketing their practices is tawdry or unethical, but at the same time, they know it's the only way their businesses will succeed. Dentists need to realize that having good business sense doesn't make you a bad healthcare practitioner!"

Visit www.thewealthydentist.com/surveys.htm for additional information on this and other Wealthy Dentist surveys in the areas of dental implants, cosmetic dentistry, sedation dentistry, and dentures.

The Wealthy Dentist is a dental marketing and dental practice management resource featuring dental consulting expert Jim Du Molin. The site’s weekly dental surveys and newsletters are viewed by thousands of dentists across the United States and Canada. The Wealthy Dentist is a sister company of the Internet Dental Alliance. IDA is the largest provider of internet dental marketing campaigns, dental websites, email newsletters and online find a dentist directories in North America.