Writers of the Future 4th quarter winners and finalists are announced. Semi-finalists and silver honorable-mentions can be found at www.writersofthefuture.com/writer-winners-4th-quarter/ 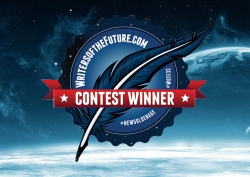 Hollywood, CA, January 14, 2016 --(PR.com)-- The 4th Quarter winners of the 32nd year of the L. Ron Hubbard Writers of the Future Contest were announced by Joni Labaqui, the contest Director.

The winners are from Utah and Washington.

They were chosen from a group of 8 finalists and are awarded a week long intensive workshop, an awards ceremony and are also published in the annual L. Ron Hubbard Presents Writers of the Future. Jon, Stephen and Julie will also receive a cash prize for their win this quarter.

The quarterly finalists are:

For information on semi-finalists and silver honorable-mentions, go to www.writersofthefuture.com/writer-winners-4th-quarter/

A Grand Prize winner is announced at the annual awards ceremony and is selected by another panel of judges. Jon Lasser will compete with the other 1st place quarterly winners for the grand prize of $5,000.00.

The Writers of the Future writing contest (www.writersofthefuture.com) was initiated by L. Ron Hubbard in 1983 to provide a means for aspiring writers to get that much-needed break. Due to the success of the Writing Contest, the companion Illustrators of the Future Contest was created in 1988.

The intensive mentoring process has proven very successful. The 368 past winners of the Writing Contest have published 838 novels and nearly 4,000 short stories. They have produced 27 New York Times bestsellers and their works have sold over 50 million copies.

The 298 past winners of the Illustrating Contest have produced over 4,500 illustrations, 356 comic books, graced 594 books and albums with their art and visually contributed to 36 TV shows and 46 major movies.