Pittsburgh-based Penn Brewery has named Harrisburg-based Wilsbach Distributors and State College-based Nittany Beverage its Wholesalers of the Year. The award is granted based on year-on-year dollar sales growth of Penn Brewery beers. 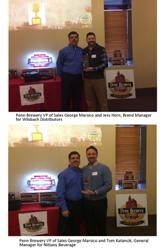 Pittsburgh, PA, February 19, 2016 --(PR.com)-- Penn Brewery is pleased to announce its recognition of Wilsbach Distributors and Nittany Beverage as its 2015 Wholesalers of the Year.

“We are delighted to recognize Wilsbach and Nittany Beverage with these awards,” said George Marsico, Vice President of Sales for Penn Brewery. “These wholesalers have worked in true partnership with Penn to grow sales and build brand distribution in their respective regions.”

Harrisburg, Pennsylvania-based Wilsbach Distributors earned the award in the new wholesaler category, growing year-on-year dollar sales by over 53 percent in 2015. Wilsbach has distributed Penn beers in seven counties in central Pennsylvania since 2009 and has broadly grown the brand’s distribution during that time. Jess Horn, Brand Manager for Wilsbach, accepted the award at a ceremony at Penn Brewery on February 4.

Penn Brewery, opened in 1986, is Pittsburgh’s oldest and largest brewery. Penn specializes in top-quality, handmade craft beers and currently sells in six states in the mid-Atlantic states. The Brewery is located in Deutschtown on Pittsburgh’s North Side, in the mid nineteenth-century landmark E&O Brewery Building. 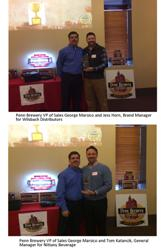