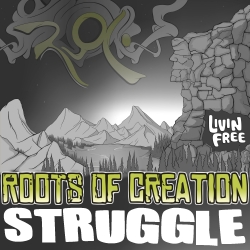 Peterborough, NH, March 04, 2016 --(PR.com)-- Roots of Creation today released a maxi-single/EP of their newest single, “Struggle,” ahead of their grandest project to date, Livin Free. The New Hampshire-based reggae/rock/dubtronica band is recognized as a Top 20 artist on the Relix/Jamband radio chart, a festival staple (Gathering of The Vibes, Wakarusa, Closer to the Sun), and an internationally touring powerhouse. Named after a Sublime song on the B-side of the Badfish CD single, Roots of Creation have been awarded “Favorite Jam Band” by Cider Magazine and “Best Band In New Hampshire” by the New England Music Awards.

The “Struggle” maxi-single/EP includes four unique versions of the song. One featuring Melvin Seals and Marshall “Ras MG” Goodman (premiered this week by Relix Magazine), another featuring only Melvin Seals (premiered by Glide Magazine), one remixed by Ras MG (Top Shelf Reggae), and finally a solo acoustic version by the band’s front man, Brett Wilson (GroundSounds). With such nuances as lush acoustic guitars and varied drumbeats, “Struggle” portrays the emotions of lyrics centered around family and touring as a musician. Each version encompasses the unique influences of Melvin Seals and Ras MG who have inspired Wilson.

“I never imagined that after listening to Sublime and Long Beach Dub Allstars religiously in my youth that I would ever be collaborating with Ras MG,” says Brett Wilson. "He is a true musician. He pushed me to the max and inspired me to keep my ears open to new sounds and ideas.”

Roots of Creation have finished their most expansive project to date, Livin Free. The project is an 18-track studio LP, complemented by a 3-disc deluxe collection with both dub/remix and acoustic versions, plus a limited edition double 12” vinyl. Livin Free will be released April 22, 2016 via the band’s own label, Bombshelter Records and distributed by ILS/Caroline/Universal Music Group. The album’s title is a nod toward New Hampshire’s state motto, “Live Free or Die,” that the band has embraced in their music and message.

Now on tour, Roots of Creation will perform select dates on the “Spring Blackout 2016 Tour” with The Expendables, Passafire, and Tunnel Vision. They will also be performing select dates with Organically Good Trio (ft. Paul W. of Slightly Stoopid), Mighty Mystic, and Spiritual Rez.

For more information on Roots of Creation, please refer to www.rootsofcreation.com.