A retelling of the myth of the Hawaiian Naupaka flower. 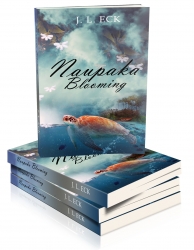 Honolulu, HI, May 07, 2016 --(PR.com)-- J.L. Eck's debut novel is a brilliantly crafted love story blending past and present, tragedy and triumph. Her story is based on the Hawaiian myth surrounding the naupaka flower, a little white flower that grows with only half its petals. Over the years, storytellers have told several versions of the myth of the naupaka flower. Some versions involve the goddess Pele and her sister Naupaka. Other versions involve a princess named Naupaka who falls in love with a commoner named Kaui. J.L. Eck's version involves a princess names Leilani and a commoner named Kanoa. What's different about J.L. Eck's version is she reincarnates the characters in modern day Hawaii for a second chance at love and redemption.

The novel has only been on Amazon for a month, but it's already gathered a lot of praise and buzz. Readers say they couldn't put it down and they could almost feel the trade winds in their hair and the sun warming their skin as they read.

J.L. Eck lived in Hawaii from 2006 to 2015. She was so moved by the beauty of the islands and the history and Aloha of the people that she was inspired to write. This novel is the end result.
Contact
J.L. Eck the Writer
Jaimie Eck
808-298-7807
www.jleckthewriter.com