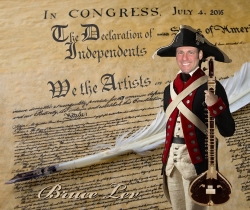 Phoenix, AZ, June 30, 2016 --(PR.com)-- Singer-songwriter Bruce Lev is proud to announce the release of his new album "The Declaration of IndependenTS"

The CD was recorded at Arrowhead Studio in Peoria, AZ over a three-year period since the release of Bruce's debut CD in 2012.

Two tracks from the album, "Catwoman" and "Jessica" were already recognized by The Recording Academy who placed them both on their official ballot for the 57th and 58th annual Grammy Awards respectively.

Beach Sloth of Skope Magazine says of the new CD, "Tapping into rock 'n' roll's heart and soul, Bruce Lev's 'The Declaration of IndependenTS' is pure fun. With a wide variety of styles, the pieces are woven together impeccably. Vocals are sung straight from the heart, the arrangements flawless, and with the right amount of passion. Bruce Lev displays a wide range indeed."

And Michael McKenna at Nor'easter Entertainment Magazine says, "'20th Century Man' is a rockin' monster! I can hear some of The Scorpions' guitars all over this one. This track is a killer cut and this CD is a must listen! On the Nor'easter Storm Scale, I give this a Force 4! Well done!"

"The Declaration of IndependenTS"

The Declaration of IndependenTS

Updated Painting of the Signing of the Constitution

A new version of the original painting of the signing of the US Constitution for Independent Artists. Try to find "the clues."